Home / Texas / Texas Farm Credit breaks ground
A new user experience is coming! We'll be asking you to login to your Morning Ag Clips account March 1st to access these new features.
We can't wait to share them with you! Read more here. 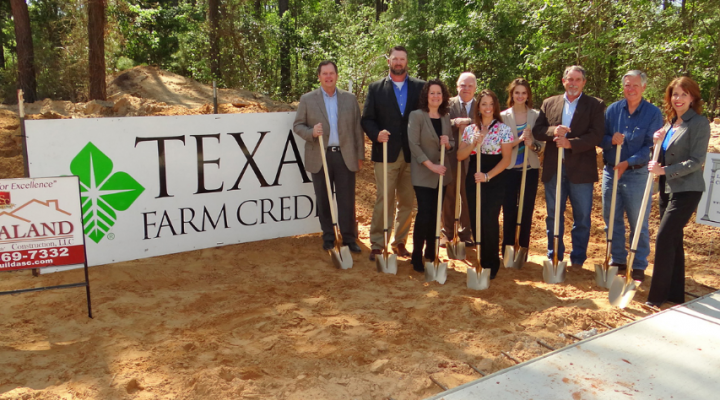 Once open, the new office at 3338 Park St., just west of Northeast Stallings Drive, will replace the office on Northwest Stallings Drive that the lender has occupied since the early 1980s. The 3,600-square-foot building is scheduled for completion at the end of 2017.

The lending cooperative’s Nacogdoches branch has long served rural communities in Angelina, Nacogdoches, Panola, Rusk, Sabine, San Augustine and Shelby counties. As a tribute to the woodlands of East Texas, it is preserving as many trees as possible at its new 2.5-acre forested site. Native woods also will be showcased in the new building, such as in cypress scissor trusses in the entryway and lobby.

“Texas Farm Credit has an exceptional team dedicated to serving the financial needs of the farmers, ranchers and timberland owners of East Texas,” said Angela Shannon, vice president of forest products lending and Nacogdoches branch manager. “This new building will reflect the values that we hold dear, and the building materials will highlight the industries that we serve. I’m eager to share it with our customers and the whole community.”

The office building will include many features and technology upgrades designed to enhance day-to-day operations and customer service. A large board room also will be available for use by community groups, said Shannon, who chairs the Nacogdoches Agriculture Committee, which hosts the annual Nacogdoches County Agriculture Appreciation and Awareness Banquet.