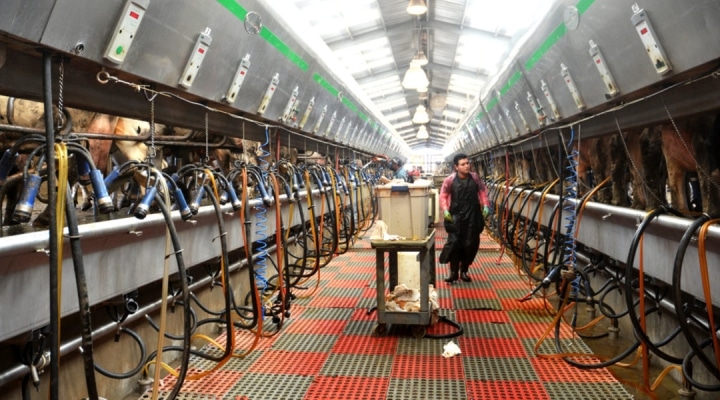 Texas dairy production is being limited by processing capacity, but the market and demand bounced back after disruptions amid pandemic uncertainty. (Texas A&M AgriLife photo by Kay Ledbetter)

COLLEGE STATION, Texas — Texas dairy producers are experiencing better prices and improving market conditions as the economy continues to emerge from the pandemic, but processing limitations are holding them back, according to a Texas A&M AgriLife Extension Service expert.

Prices have rebounded compared to a year ago, said Jennifer Spencer, Ph.D., AgriLife Extension dairy specialist, Stephenville, and demand continues to be high for milk and milk products from cheese to ice cream.

“It’s good and bad news,” she said. “Prices are good, but processors are overloaded with milk and a tiered program has been implemented giving producers an allotment of milk production before receiving a discount, so they’ve in turn had to pull back on production for now.”

Spencer said producers would like to be maximizing on the excellent crop production fueled by rains this spring but will have to wait.

Ongoing expansion of the state’s processing capacity with a new cheese processing facility in Amarillo will help to reduce the duration of the allotment program, she said. Spencer suspects the state will quickly move into third place ahead of Idaho for U.S. dairy production once processing volume allows Texas dairy producers to operate at maximum capacity and/or expand.

The good news is the Texas dairy industry overall emerged from more than a year of adversity, Spencer said. Unfortunately, some dairy operations didn’t. She said there were approximately 400 registered dairies in the state in 2019. There are now 351.

Texas dairy producers faced challenging times as COVID-19 disrupted the market destinations for milk, cheese and butter due to school and restaurant closures. Uniform milk prices fell after March and April and dropped from $19 per hundredweight to around $14 per hundredweight. For the year 2020, the average price was $15 per hundredweight.

Dairies also dumped around 14 million gallons and incurred losses of around $8 million in February as Winter Storm Uri brought the logistical chain from raw milk pick up to processing and product delivery to a virtual standstill.

Prices slowly recovered as the pandemic wore on but have yet to reach pre-pandemic levels – around $19 per hundredweight, Spencer said. Milk prices were around $17 per hundredweight and could be poised to climb during the summer.

“There are a lot of creative milk products, which helps demand, but there is also that summer demand for ice cream,” she said. “That and the drop in milk production by cows during the summer, and we could see prices climb a bit more.”

Increased export demand adds another element to price forecasts being good for producers, Spencer said, adding the future for Texas dairy production appears much brighter than in 2020.

“There have been positive developments lately,” she said. “Once the additional processing is available, it’s possible that Texas could move into third place, but the two top producers – California and Wisconsin – are way ahead. But, over the next decade with all the growth in the Panhandle, who knows?”