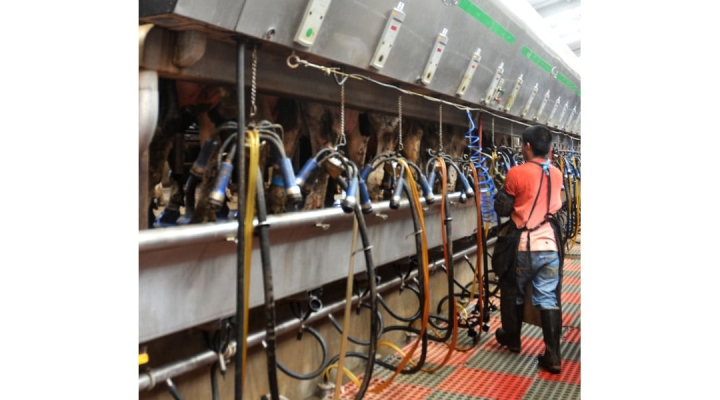 COLLEGE STATION, Texas — Texas dairy producers pushed into third place nationally at the beginning of 2022 and have experienced historically high prices and input costs, according to a Texas A&M AgriLife Extension Service expert.

Spencer predicted last year that Texas would move past Idaho and into the No. 3 milk production spot nationally as more processing facilities opened. Two cheese processing plants – Abilene and Amarillo – broke ground last summer and will increase the capacity for producers in the Texas Plains, where 80% of the state’s milk is produced.

But even without the added processing capacity, Texas milk producers increased the number of dairy cows by 20,000 head, which helped Texas surpass Idaho in milk production between January and April. Texas dairies produced 1.4 billion pounds of milk compared to 1.39 billion pounds produced in Idaho.

Texas slipped back to fourth as higher temperatures set in, according to the Texas Association of Dairymen.

Spencer said milk production in June 2022 increased 6.9% compared to June 2021. Texas milk production totaled 15.6 billion pounds in 2021, up 5% from 2020, according to the U.S. Department of Agriculture. Total cash receipts were around $2.83 billion for the Texas dairy industry.

“Idaho has been struggling with drought and heat as well, but we have extreme heat, humidity and limited water availability to contend with,” she said. “But where most states are shrinking or maintaining production, Texas is consistently increasing milk production, demonstrating how dairy is a thriving agricultural industry in the state.”

Prices high, but costs up as well

Historically good prices are welcome news to dairy producers as the industry recovers from pandemic restrictions that impacted consumption of products from carton milk for schools to butter and cheese used in restaurants.

But despite the good prices, Spencer said dairy producers have also faced much higher input costs. Feed, fuel and fertilizer prices have driven the break-even price per hundredweight of milk higher as well.

“That break-even price is operation-specific – where they are, what they feed and the size of the dairy – but input costs have pushed that price too close for some,” she said.

Spencer said dairy industry trends continue to show the number of dairies is declining as the dairy size and overall production continues to rise.

Demand for milk and the range of dairy-based products from protein powder, cheese and ice cream continues to rise despite fluid milk demand being down 2.4% from this time in 2021.

Export demands continue to be strong as well.

“Texas has been doing extremely well among the top 24 dairy producing states, and I expect that trend to continue,” she said. “We’ve been in a back-and-forth battle for third place, but with the production increases we’ve experienced and the processing facilities coming, dairy production in Texas is looking strong.”