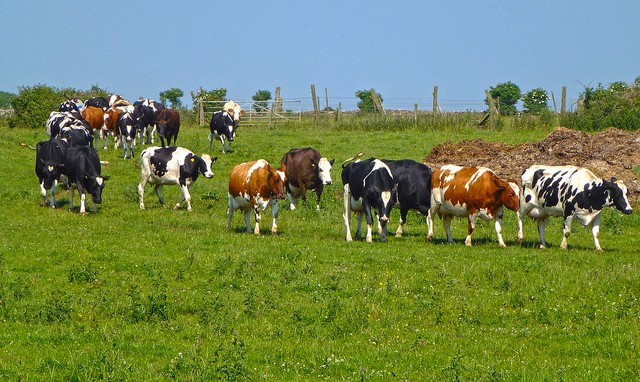 June – National Dairy Month – is a good time for dairy farmers such as myself to let the public know that we’re committed to keeping them healthy and safe. (Polyrus, Flickr/Creative Commons)

GUSTINE, Texas — When you buy a gallon of milk at the store, do you wonder if it’s safe to drink? Probably not, and with good reason. Pasteurization may have been invented 154 years ago, but it’s still the best, and only, way to kill potential disease-causing bacteria in milk. As a result, pasteurized milk and other dairy products purchased in a store rarely pose danger of sickness from harmful bacteria.

June – National Dairy Month – is a good time for dairy farmers such as myself to let the public know that we’re committed to keeping them healthy and safe while drinking milk from our farms, or eating cheese, ice cream or other food made with that milk.

Numerous steps are taken during milk’s journey from farm to store to ensure its safety. Each one is important, but pasteurization is key. In fact, dairy farmers believe it’s such a critical step that most of us only feed our families pasteurized milk, even though we have an abundant supply of milk straight from the cow on our farms.

Through our industry organization, the Texas Association of Dairymen, our state’s dairy farmers also have been working hard to educate the Texas Legislature about the importance of pasteurization. We’ve been talking to them since 2011, the first legislative session that bills were filed to expand the sale of unpasteurized (or raw) milk in our state. And we’ll keep talking to them, as we anticipate another such bill to be filed in 2019.

While the 2019 session doesn’t open until January, National Dairy Month is a good time to restate our opposition to any proposal that puts Texas milk drinkers at risk.

States – not the federal government – regulate unpasteurized/raw milk sales. In our state, Texans can buy raw milk only from the farm where it is produced. Raw milk dairies are required to be licensed by the state. Law mandates they are to be inspected by the state twice every six months and their milk tested for bacteria every six weeks. However, untested milk is free to leave the farm with a buyer. Some buyers report traveling hundreds of miles to buy their raw milk at the dairy – do they keep that milk at a safe temperature on their way home?

By comparison, milk you buy at the grocery store has been tested numerous times, transported at a specific temperature and undergone numerous food safety checks. You can be confident you’re buying a safe product.

The Centers for Disease Control and Prevention and other legitimate medical and scientific organizations and studies all agree: raw milk is a serious health risk, especially for children. It does not prevent or cure disease or illness, nor does it offer any health benefits.

Expanding raw milk sales – especially in a state as big as Texas – would lead to increased illness, or worse, if it became more available.

The day in 2011 a Texas House committee first debated a bill to expand raw milk sales, state health officials announced that three children and one adult in the Dallas area were hospitalized with salmonella after drinking raw milk. Last September, raw milk from another Texas dairy was found to be the cause of illnesses in at least seven states.

The best way for the Texas Legislature to protect Texans from the dangers of raw milk is to do nothing. Lawmakers should leave the law regulating raw milk the way it is – there are a lot more pressing issues affecting the people of Texas that our Legislature should focus on.

David Volleman is a dairy farmer and manager of Wildcat Dairy near Gustine, Texas. He is chair of the Texas Association of Dairymen board of directors. The Volleman family has been in the dairy business for more than four generations.