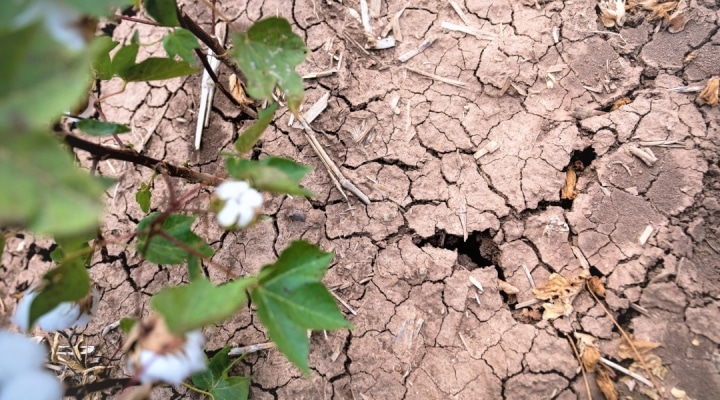 A cotton field near College Station was faring much better than most acres across the Texas Plains, but the cracked soil is indicative of drought conditions many Texas cotton producers experienced this season. (Texas A&M AgriLife photo by Sam Craft)

The northern and southern High Plains produce the majority of Texas cotton. Generally, around 4.5 million acres of cotton are planted in the two regions. Around 60%, or 2.7 million acres are dryland while the rest have at least some irrigation.

Murilo Maeda, Ph.D., AgriLife Extension cotton specialist, Lubbock, said drought conditions have led to near-total failure of both regions’ dryland acres, and drought and extreme heat have put much of the regions’ irrigated fields in jeopardy of failure or abandonment, especially where irrigation capacity is limited.

A U.S. Department of Agriculture Farm Service Agency report indicates almost 70% of dryland and 35% of irrigated cotton acres in those two regions failed.

However, Maeda fears the report may be conservative. Most acres were clear failures, he said, but many acres produced crop stands that drought alone did not kill.

Those stands are in poor shape production-wise and may not be worth harvesting, he said. Many more fields may not be harvestable due to poor plant development due to drought.

“It certainly looks like it reflects the reality in dryland fields, but it may actually be lower than what we are seeing on the ground for the rest of the acres,” he said. “There’s just not a lot out there, and a lot of the fields still standing may not be harvested. It’s pretty brutal.”

Some irrigated fields looked decent in her area, but plant development was similarly impacted by drought and heat, she said. Irrigated fields need some rainfall to meet plants’ water demands, and there was very little during the growing season.

Kimura said there has been one positive to the difficult drought conditions – low pest pressure. Producers have treated irrigated fields for insect pests like flea hoppers once or twice compared to several rounds of proactive sprays, which helped cut some input costs.

But now, a late-season problem – weeds – are abundant and growing rapidly in fields following good rain showers that delivered soil moisture to the region. Kimura said treatment will likely depend on the yield potential and individual producer’s management routines.

“It has been a tough growing season, but we hope this rain and cooler temperatures allows some producers to end the season on a high note,” she said. “Hopefully that will carry into the wheat season and we get off to a good start.”

Maeda said he worries about the regional cotton infrastructure, including gins and related businesses, that depend on production and processing. Cotton gins operate seasonally. They typically receive thousands of bales of cotton for processing following harvest.

The lack of cotton production could generate a longer-term ripple effect if gins do not run, and other support businesses are not able to withstand the losses.

“My concern is for the folks in the region who are reliant on cotton,” he said. “A bad season will affect producers, but the downstream impact to the infrastructure is what we’re worried about, because losing that type of capacity can take longer to recover.”