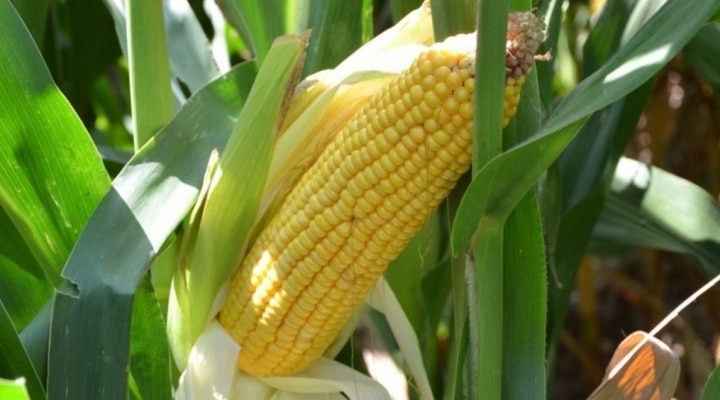 Corn yields were expected to be surprisingly good overall despite less than optimal weather conditions around the state. (Texas A&M AgriLife Extension)

COLLEGE STATION, Texas — The Texas corn crop has reached the midway point, and expectations are for an above-average crop, according to a Texas A&M AgriLife Extension Service expert.

Schnell said weather variabilities, especially rainfall and its timing, were the major contributor to field success or failure around the state. Too much rain delayed or prevented corn planting in some areas while drought created problems for many other regions.

“It’s been a challenging year for Texas corn growers,” he said. “Corn acres were down, and yields have been mixed so far here at the halfway point. I didn’t expect to see above-average yields because of how dry it’s been and how spotty the rains were all season.”

Corn acres down, yields up

Corn acres were down slightly this season, Schnell said. According to a U.S. Department of Agriculture August report, Texas producers planted 2.5 million acres of corn in 2019 compared to 2.4 million acres in 2020.

About half of Texas’ corn acres are harvested, he said, with the state’s major corn-producing region – the Panhandle – typically winding down in October. Schnell said he was somewhat surprised to see the USDA’s expected corn yields to be up slightly overall this season due to weather conditions.

The USDA reported per-acre yields at 133 bushels last year, and an updated per-acre yield forecast of 138 bushels for 2020 as the growing season continues. “Yields have been mixed around the state so far,” he said. “I observed corn barely reaching waste high by tasseling stage along the Coast. You expect bad yields when plants are stunted due to dry weather, but timely rain fell in some areas and made a good crop.”

Irrigated and dryland Texas A&M AgriLife Research Corn Performance Trials in Rio Grande Valley, Corpus Christi and along the Upper Coastal region performed well despite challenges in the region. Full reports and multi-year data will be available this fall.

“They were basically good yields in our locations, but then fields not too far away were really dealing with some tough conditions,” he said.

Too much, too little rain

Producers in north Central Texas received excessive rains in spring that forced producers to plant much later than normal, Schnell said. Some acres were not planted as producers missed the planting window for corn.

“Some producers weren’t able to plant until April, and that pushed a lot of those fields into hot, dry weather, which is not a good recipe for corn yields,” he said.

As a result, charcoal rot, which is typically associated with drought stress, caused some issues, he said. The disease-infested plants were under stress, and producers were seeing premature death by the dent stage.

Schnell said he estimated up to 30% losses in those fields hit by charcoal rot. But overall, the Texas corn crop appears to have escaped any major pest or disease issues.

There was some concern about an early freeze in the Panhandle and Texas Plains this week, Schnell said. Most plants are not mature yet, and they are susceptible to yield losses, but how low temperatures get and duration at those temperatures will determine the potential for damage. If freezing temperatures are avoided, corn will continue to grow once temperatures warm up.

“We’re about halfway through with the state’s corn crop, and hopefully there are no major issues in the Panhandle,” he said. “It’s been a few years since we’ve been this dry across a large portion of the state, but whether it’s wet or dry, we don’t like the extremes on either side.”

After severe drought conditions, the district received 2-12 inches of rainfall. There was some flooding reported. This rainfall was a game changer for most farmers, but especially for livestock producers. Producers were expecting to make a final cutting of hay, and soil moisture to be good for winter grazing and small grains. Water tanks were replenished. Pastures were in fair condition, and livestock were in good to fair condition. Cotton producers weren’t very excited about the rain as harvest approached. Nearly all counties reported adequate soil moisture.

Areas of the district received 4-8 inches of rain, and more was in the forecast. Cotton continued to progress. Wheat farmers were ready to plant but waiting for fields to dry. Pastures and rangelands were greening up, and producers may get another cutting of hay. Cattle looked good, and calves should make good gains before weaning in October. The sorghum harvest was on hold due to wet conditions.

Temperatures were above average with mostly dry conditions. Some very light rain showers were reported. The showers halted harvest operations for a short while. Farmers were actively disking, destroying stalks and other post-harvest activities including bedding fields for 2021 crops. Most cotton harvesting was complete with some late-planted, irrigated fields left in the upper end of the reporting area. Cotton yields were above average. The main rice harvest was finished. Field preparations for fall wheat and oat planting should begin soon. Pastures continued to decline due to the extended hot, dry weather. Hay operations slowed down and needed some rain to get a decent final cutting. Livestock were still in good condition. Pecan trees were dropping nuts due to dry weather and heavy crop loads.

Between 3-6 inches of rain fell across the district. Conditions improved drastically in many counties. Some hay production was put on hold due to rain. Pasture and rangeland conditions were good. Subsoil and topsoil conditions were adequate. Fall gardens were growing well. Producers were preparing for winter pasture establishment. Livestock were in fair to good condition. Armyworms were reported in several areas. Wild pig activity increased with the recent rains.

Much-needed rains delivered trace amounts up to almost 3 inches across the district. Cotton stopped setting bolls, and early planted cotton bolls were opening. Farmers who planted pumpkins early were busy harvesting, but it will be a couple of weeks before pumpkin harvest ramps up. Hay grazer and corn harvests continued. Cattle were in good condition with supplemental feeding. Some farmers were getting fields ready for wheat planting.

Northwestern parts of the district reported adequate topsoil and subsoil moisture while the northeastern corner was very dry. Central and southern areas reported short to very short topsoil and subsoil. Pasture and rangeland conditions were very poor to good, depending on location moisture levels. Corn was in poor to good condition. Cotton and sorghum were in good to poor condition with most areas reporting fair to poor growing conditions. Peanuts were in good to fair condition. All crops were in the final stages of production, and harvest should begin soon. Fall planting was underway in some parts of the district, while producers in some areas were waiting for some much-needed moisture.

Topsoil moisture ranged from adequate to surplus after 2-7 inches of rain fell across the district. Grasses were greening, and the stock ponds were refilled as a result. Temperatures dropped into the 70s and 80s in some counties. Corn harvest was almost complete. Soybeans and cotton were doing okay in some areas and not so well in others. Livestock were in good condition. Spring-born calves looked good. Summer pastures improved dramatically following the rains.  Feral hog activity increased due to cooler, wet weather. Armyworms were active.

Temperature highs were beyond 100 degrees with lows in the lower 60s. Only trace amounts of rain were reported. A large pasture fire burned 11,000 acres and took days to control. Dryland cotton was still in poor condition but started to set bolls, and some bolls were starting to open. Irrigated cotton was still growing well and started to set bolls. Rangelands remained in poor condition. Alfalfa farmers continued to cut and bale and reported weedy pastures. Beef cattle were in good overall condition as some producers prepared to calve small groups for fall calving. Pecan producers were still irrigating orchards to fill nuts and were optimistic about the crop.

Much of the district received much-needed rain showers, but northern areas remained dry. Some farmers planted wheat and oats. Cotton conditions were declining slightly. Pastures were in poor condition and supplemental feeding of livestock continued. Ranchers were starting to cull livestock. Stocker and feeder prices were lower across all classes of cattle.

Some scattered rains were received in some areas, but conditions remained dry overall. Cooler temperatures were in the forecast. Rangeland and pasture ratings were excellent to poor with fair ratings being most common. Soil moisture levels ranged from adequate to very short with adequate levels being the most common.

Parts of the district reported up to 2 inches of rainfall. Areas that did not receive moisture continued to experience extremely dry conditions. Corn and grain sorghum harvests were complete with reports of average to good yields. Livestock were in fair shape with supplemental feeding. Cattle, sheep and goat prices were steady. Fall shearing continued. Dove season opened with good numbers reported. Home gardeners have started planting fall gardens.

The district reported hot weather conditions with very short to adequate soil moisture levels. Temperatures were 100-plus degrees daily in most areas and the high 90s everywhere else. Live Oak County reported the heat index reaching 120 degrees. Some scattered showers were reported. La Salle County reported 1 inch of rain, and Live Oak County reported trace amounts of rain up to 2.5 inches, while Starr County reported up to 1.5 inches of rain in areas. Rangeland and pasture conditions improved in some areas and continued to decline in drier areas. Some areas reported pastures were moist and greening up. Row crop producers were focused on remaining cotton and most were optimistic harvest should wrap up soon, but rain was in the forecast. Jim Wells County reported aside from a few straggling grain fields, all grain sorghum was harvested. Cotton defoliation and harvest continued. Peanuts were under irrigation and continued to develop. Soil was being prepared for strawberry plantings. Rains were not beneficial for dove hunters. Preparations for fall crops were underway. Irrigated fields of watermelons and cantaloupes were producing good harvests, and Coastal Bermuda grass pastures were producing good hay bales. Beef cattle producers were culling and selling, and a few earlier weaned calves were showing up at local markets. However, hay producers were busy the last few weeks harvesting forages produced after the rains brought by Hurricane Hanna. Supplemental feeding of livestock and wildlife increased in drier areas. Irrigated pecan orchards were in good condition. Zapata County reported stock tanks were full. A few sesame fields were harvested.