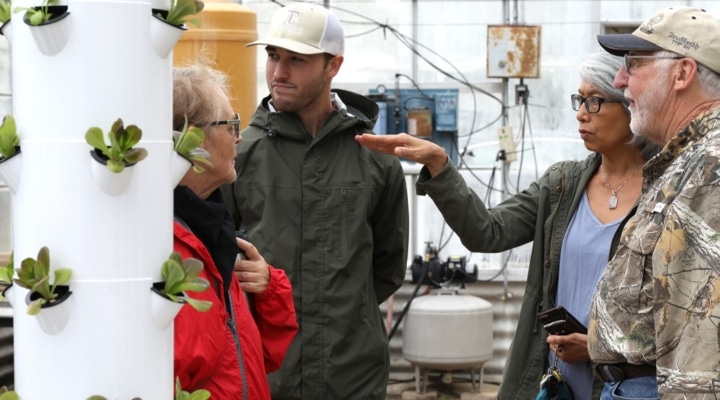 COLLEGE STATION, Texas — Urban farming comes in many forms, and now one of those, vertical farming, is helping feed students at Texas A&M University.

The project is part of an experiential learning initiative and is a required part of the curriculum for undergraduates in the Texas A&M’s Department of Soil and Crop Sciences.

The department offers internships and study abroad opportunities to help students meet this requirement. Broch Saxton, one of the department’s December graduates, created his own internship as a student leader and greenhouse project director with Texas A&M’s Urban Farm United, or TUFU.

TUFU is an urban farm that utilizes tower gardens or vertical towers that produce high-value/specialty crops in a space-conscious technique via hydroponic growing methods.

The project, started by Saxton, is in a greenhouse on the Texas A&M campus. It currently includes 24 towers in which a variety of produce is grown, with plenty of room to expand.

The urban farm project began as a collaboration between Saxton and Lisette Templin, an instructional assistant professor from Texas A&M’s Department of Health and Kinesiology.

“I have dreamed of running greenhouses in this form,” Saxton said. “Using the knowledge obtained from my degree, I want to help people have better access to greater food, all while ingraining hydroponic farming into the university. My experience in this process has been completely driven by networking and passion. This is what I want a career in.”

“Hydroponics have huge potential to benefit many people,” he said. “When I approached the Texas A&M Office of Sustainability with my idea of a vertical farm project, they suggested I partner with Ms. Templin, who had approached them with a similar idea.”

Templin has a tower garden on her patio, which feeds her family of four.

Templin and Saxton envisioned a project that could potentially feed Aggie students and staff on campus. They submitted an abstract to the Aggie Green Fund. In January 2019 received a $60,000 grant and permission to use space in a greenhouse owned by the Department of Plant Pathology and Microbiology.

Using grant funds, they purchased towers and a closed-loop watering system that provides nutrition to the plants. They also bought 800 seedlings from an urban farm in Austin to use for their initial crop. They will be self-sufficient and seed their own plants for future endeavors.

The first crop included four different types of lettuce, kale, snap peas, snow peas, herbs, chard, bok choy, tatsoi and celery. They plan to expand the project to include peppers in the next round.

The team manages each tower individually to ensure the pH of the water is appropriate for the stage of growth and nutritional requirements are met.

Since it is an internship and Saxton received college credit for his time with TUFU, he needed an adviser in the department. He reached out to Jacqueline Aitkenhead-Peterson, Ph.D., associate professor of urban nutrient and water management.

“I had taken courses under Dr. Peterson and was impressed by her value as a teacher and her approach to education,” Saxton said. “She has the mentality of mentorship and guidance that I was looking for.”

Aitkenhead-Peterson said she was happy to serve as Saxton’s adviser for the project.

“The fact that this project was not research based was very unusual to me,” she said. “However, this project is about feeding people and educating them on the possibilities of feeding themselves, which I deem to be a very important exercise.”

The produce harvest by TUFU was distributed by the 12th Can Food Pantry, a student-run program on the Texas A&M campus, which serves all students, faculty and staff in need of assistance.

TUFU looks forward to continuing to support the 12th Can and hopes to expand to support student dining.