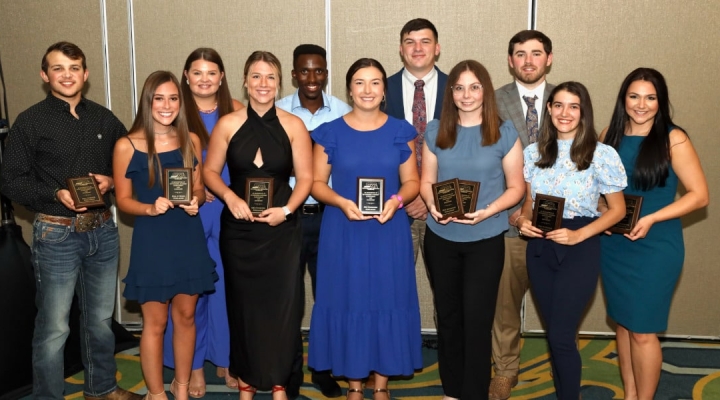 Student scholarships for were given to 22 students in the Texas A&M College of Agriculture and Life Sciences totaling $47,500 from the Southwest Meat Association Foundation during this year’s convention held in Galveston July 27-30. (Texas A&M AgriLife photo)

GALVESTON, Texas — Scholarships were given to 22 students in the Texas A&M College of Agriculture and Life Sciences totaling $47,500 from the Southwest Meat Association Foundation during this year’s convention held in Galveston July 27-30.

Thirteen undergraduate and eight graduate students received the awards relating to animal science and food science and technology majors, as well as other areas.

The Southwest Meat Association Foundation was formed in 1987 utilizing donations from its members interested in assisting students pursuing meat industry careers. In 2021, the foundation awarded over $84,500 in scholarships.

“The Southwest Meat Association Foundation has been a longtime supporter of furthering academic excellence in the meat industry for undergraduate and graduate students,” said Jeffrey W.  Savell, Ph.D., vice chancellor and dean for Agriculture and Life Sciences. “We are very appreciative of their continued support and also extremely pleased with this selection of Texas A&M students as they excel academically and prepare for exciting careers.”

Savell was inducted into the Southwest Meat Association Hall of Honor. The award is selected by the association’s directors and given in recognition of “selfless service, dedication and passionate support.”

Kaylee Greiner, Christiansburg, Virginia. Greiner is a second-year master’s student focusing on meat science. While pursuing her degree, Greiner also coaches the 2022 Texas Aggie Meat Judging Team and co-coaches the 2022 Meat Science Quiz Bowl team. After graduation, she plans to pursue a career in the meat industry with interests in advocacy and marketing.

Lauren Lee, Hamilton, a first-year doctoral student studying meat science and food safety. After graduation, she plans to enter a career in academia.