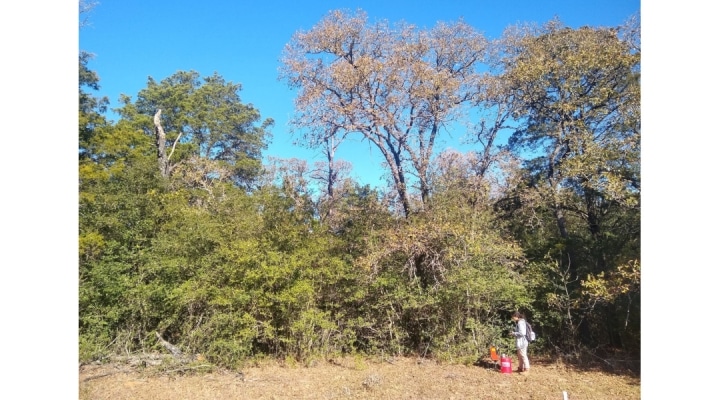 Scientists from Texas A&M AgriLife Research and the College of Agriculture and Life Sciences are undertaking a project that will shed light on how changes in land use and the encroachment of woody plant thickets are dramatically reducing groundwater recharge. The three-year project is funded by a $750,000 U.S. Department of Agriculture National Institute of Food and Agriculture grant.

Bradford Wilcox, Ph.D., AgriLife Research professor of ecohydrology in the Department of Ecology and Conservation Biology, Bryan-College Station, said the project has broad implications related to water availability and land stewardship in Texas.

Over the past 150 years, native post oak savanna landscapes have been transformed due to numerous factors, including cultivation and subsequent abandonment, altered fire regimes, urbanization and land fragmentation. These changes in land use allowed undesirable plants, such as yaupon and junipers, to invade the understory, creating dense thickets of vegetation—a process described as thicketization.

“We are relatively confident parts of the recharge area is being dominated by thickets, causing dramatic reductions in recharge from rainfall,” he said. “This project will provide a comprehensive analysis of this phenomena across the Post Oak Savanna ecoregion and provide useful information that can guide long-term land stewardship and restoration efforts to help maintain one of the state’s most precious resources.”

Wilcox, collaborators Briana Wyatt, Ph.D., soil scientist in the Department of Soil and Crop Sciences; Jason West, Ph.D., plant physiologist, and Sorin Popescu, Ph.D., professor of remote sensing, both in the Department of Ecology and Conservation Biology; and a team of graduate students, including ecohydrology Ph.D. candidate Shishir Basant, will conduct the study. The project is based on Basant’s doctoral dissertation work.

The overarching goal of the project is to identify and quantify the impacts thicketization has had on the Carrizo-Wilcox Aquifer’s ability to capture water from rainfall across its recharge zone.

The Carrizo-Wilcox Aquifer has long been utilized by private well owners, municipalities, agricultural producers and industry. It is the third most important groundwater resource in Texas after the Edwards and the Ogallala aquifers.

Recoverable water storage in the Carrizo-Wilcox Aquifer is estimated to be between 1.3 billion to 3.9 billion acre-feet. An acre-foot is the amount of water needed to cover 1 acre of land with water 1 foot deep, almost 326,000 gallons. By comparison, Toledo Bend, the largest surface-water reservoir in Texas, was designed for a total storage capacity of 4.6 million acre-feet.

The aquifer’s water table has dropped more than 150 feet over the past several decades.

As land-use changes and fragmentation accelerates, Wilcox worries thicketization will worsen unless landowners and policymakers are made aware of its negative impacts.

“I think a lot of landowners have allowed their properties to slip back into what they believe to be the natural state,” he said. “But historically, the Post Oak Savanna ecoregion included vast open grasslands. So, identifying the underlying negatives of these habitat changes in ways that people can relate to, whether it is wildlife or water availability, helps educate and activate change.”

Wilcox said providing data could help guide policies and initiatives by the Texas Legislature and state agencies like the Texas Water Development Board to improve water recharge in the aquifer.

Wilcox and his team believe the Post Oak Savanna holds particular promise for increasing groundwater recharge because about one-third of the ecoregion overlies the Carrizo-Wilcox recharge zone—a deep sandy formation that allows water to filter into the aquifer.

Wilcox said the team’s theory is that thicketization is preventing water infiltration and percolation into the deeper sediments and the aquifer. Soil core samples collected within the Post Oak Savannah Groundwater Conservation District showed distinct differences in how water moved through open soils compared to the thickets.

Wilcox said impacts of thicketization will vary across the geological and regional gradiant, but he expects to find compelling evidence that invasive woody plants are connected to water table reductions in the aquifer.

“If our suspicions are correct, the conversion to thicketization could present real implications for the sustainability of the aquifer,” he said.

The team will employ a variety of field measurements by taking core samples and using sensing equipment at various locations in the ecoregion. They will analyze and measure the natural give-and-take of water across these landscapes, specifically the aquifer’s recharge capabilities.

Wilcox said a primary location will be the Texas Parks and Wildlife Department-managed Gus Engling Wildlife Management Area north of Palestine. A second heavily monitored location will be in oak forests within the U.S. Forest Service-managed Caddo-L.B.J. Grasslands near Decatur.

Both areas have extensive savanna grasslands that are likely similar to what much of the Post Oak Savanna was prior to settlement. Open savannas at both locations are maintained by frequent fire regimes.

“Water movement under the thicketized areas is slowed down because of higher transpiration demand by the trees in these areas,” Basant said. “There is a clear and measurable difference between those deposits and open areas where water moves more rapidly through the soil.”

Aside from answering questions related to thicketization’s impact on recharge and how much restoration efforts might enhance water collection, the team will also focus on other valuable data related to the Carrizo-Wilcox Aquifer. These will include what type of rain events drive aquifer recharge, how deeply trees are accessing soil water, evapotranspiration rates by vegetation, and the rate of thicketization over the past four decades.

Researchers will also be able to scale up results for the entire region using both field and remote-sensing analysis, Basant said. The data can also be applied to modeling for other oak savannas.

“We believe this project will shed light on a solvable problem related to a historically important water resource for the state,” Wilcox said. “What we are doing could impact water and land conservation efforts within the Post Oak Savanna ecoregion and beyond.”