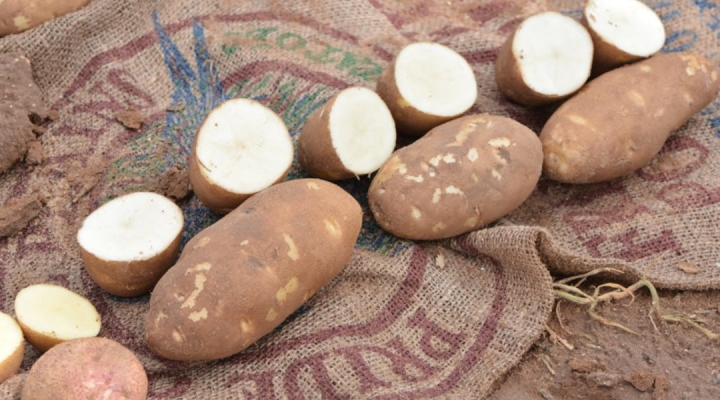 Participants will assemble at Springlake Potato Sales, located off of Texas Highway 385 between Littlefield and Springlake, at 10 a.m. and then go to the field, said Isabel Vales, Ph.D., AgriLife Research potato breeder in the Texas A&M Department of Horticultural Sciences within the College of Agriculture and Life Sciences.

“We always look forward to the field day because it allows everyone involved in the industry, including researchers, commercial and seed growers, processors and retailers, to exchange ideas and identify priorities,” Vales said. “In addition, participants will have the opportunity of enjoying catered lunch and networking.”

This year there are 180 potato clones — russets, chippers, reds, yellows, purples, smalls and fingerlings — including Texas-released varieties, advanced selections and some advanced clones from other breeding programs.

“The Springlake location is prone to abiotic stresses that usually reduce yield and quality,” Vales said. “The yields are a little low this year, but the quality is good.”

The growing season began with strong winds, and the crop experienced mild hail in the middle of the growing season, said Jeff Koym, senior research associate with AgriLife Research, Lubbock.

Vales said most Texas-released varieties and advanced selections are tolerant to heat stress since they have been selected under high-temperature growing conditions.

“Recently, we have conducted studies that validate this fact,” she said. “Industry members nationwide and internationally are encouraged to evaluate our clones to determine if they perform well under their conditions, especially in the context of global warming.”

This year is special because it marks the 25th anniversary of the establishment of the Southwestern Regional Potato Cultivar Development Consortium, initiated in 1997 by Colorado State University, Texas A&M University and the University of California at Davis to meet the unique needs of the southwest potato industry.