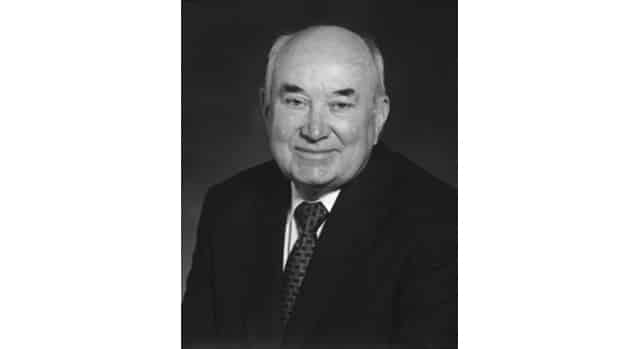 Adkisson became a professor of entomology at Texas A&M in 1958, and went on to serve as the chancellor of the Texas A&M University System from 1986 until 1990, before retiring in 1994 as a distinguished professor. During his long career at Texas A&M, he also served as deputy chancellor, vice president for agriculture and renewable resources, and head of the Department of Entomology.

“Texas A&M and Texas agriculture are eternally grateful for the contributions Dr. Adkisson made during his years of service,” said Patrick Stover, Ph.D., vice chancellor of Texas A&M AgriLife, dean of the College of Agriculture and Life Sciences and director of Texas A&M AgriLife Research. “His leadership and dedication will serve as an example for all faculty, current and future.”

Adkisson makes a difference in agriculture

Adkisson was an early pioneer in developing the concepts for integrated pest management through his research on control of the insect pests of cotton. He led the development of highly successful integrated control programs for the boll weevil, bollworm and other key pests of cotton and saw these programs implemented on millions of acres of Texas cotton. He also was instrumental in the development and implementation of similar programs for other major Texas crops.

He also was named a Regents Professor of entomology, Chancellor Emeritus and Distinguished Professor Emeritus. Adkisson was also inducted into the Texas Heritage Hall of Honor at the State Fair of Texas in 1998.

Adkisson received the three most prestigious international awards in agriculture, the Alexander Von Humboldt Award, the Wolf Prize in Agriculture, and the World Food Prize. He was listed among the 25 agricultural scientists having the greatest impact on U.S. agriculture in the 20th Century.

Other recognitions he earned over his lifetime included: Entomological Society of America’s J. Everett Bussart Award for Outstanding Research in Economic Entomology; Man of The Year for Texas Agriculture, Progressive Farmer; Distinguished Texas Scientist of the Year by the Texas Academy of Sciences; and Distinguished Service Awards from the American Institute of Biological Sciences and the American Agricultural Editors Association.

Adkisson was elected to The National Academy of Sciences, the American Academy of Arts and Sciences, and served as president of the Entomological Society of America.

Services will be live streamed via Facebook by Memorial Funeral Chapel at 3 p.m. July 3.

A bearish Hogs and Pigs report