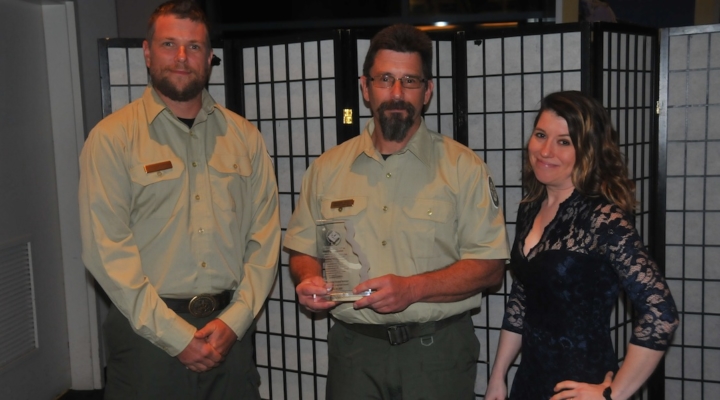 The state forestry agency and NMFWA have been working together through a Memorandum of Understanding with the Texas Army National Guard since 1999. The MOU guides work to conserve military lands, natural resources and wildlife in Texas while building the capacity of soldiers, firefighters and local fire departments.

“I nominated TFS for the Conservation Partnership Award as a way to recognize how valuable the guard believes our relationship is with them,” said Wayne Strebe, Texas Military Department Natural Resources Specialist. “This award recognizes their excellent efforts in support of our military’s natural resources.”

According to Texas A&M Forest Service Fire Chief Mark Stanford, when conserving natural resources and protecting lives and property we are stronger together.

“One leadership strength that both Rich and Steven possess is developing and supporting partnerships to the benefit of the citizens of Texas,” said Stanford.

Gray, Moore and the task force helped design wildfire protection areas at these locations to help moderate the risk of wildfires caused by military training activities.

“The expertise and manpower provided by TFS for our military fire management program would have been cost prohibitive if not for this partnership,” said Strebe. “They have leveraged their relationships with other local and state agencies resulting in city and county personnel helping conduct prescribed burning operations at the training centers.”

Texas A&M Forest Service also hosts wildland fire academies at the military training centers for soldiers, employees and thousands of firefighters from around the state and nation, returning each of them to their home units with increased firefighting knowledge to better protect their communities.

In addition to contributing to the military wildland fire program, the task force has helped remove invasive species on over 500 acres of training lands and reforested native trees on 70 acres of disturbed areas.

“I believe they deserve to be recognized for their contribution to the Texas Army National Guard,” said Strebe. “Without this partnership, the wildland fire program would not exist.”