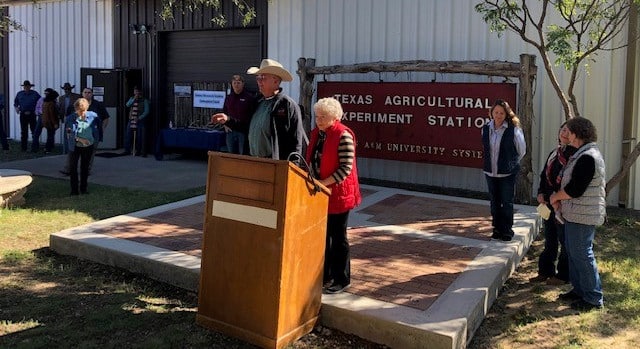 “It was a beautiful Saturday morning for the unveiling and celebration of over 100 years of research, teaching and Extension at the Sonora Research ‘Substation 14’,” said Roel Lopez, Ph.D., head of the Department of Rangeland, Wildlife and Fisheries Management in the College of Agriculture and Life Sciences.

“The crew at Sonora and San Angelo put on quite a show and should be commended,” said Lopez, who is also director of the Texas A&M Natural Resources Institute, Bryan-College Station. “It was great to be part of the 125-plus crowd of local community ranchers at the celebration.”

For more than a century, the Texas A&M AgriLife Sonora Station has been a leader in rangeland and livestock research. The station has attracted scientists and students from across the U.S. and around the globe.

This has resulted in innovations and advancements across the Edwards Plateau that were particularly key to the state and nation’s sheep and goat industries. Researchers at the station have also led key studies related to livestock nutrition, rangeland management and prescribed burns.

“We are blessed to have a dedicated group of Texas A&M AgriLife faculty and staff in Sonora and San Angelo,” said Reid Redden, Ph.D., sheep and goat specialist and Texas A&M AgriLife center director at San Angelo. “The stakeholders in this region have been and continue to be committed to the Sonora Station, as was evident by the turnout to be a part of the historical marker dedication.”

“It has been an honor to work for the last five years at such an historic location; a location with a century of science and a legacy of learning,” Tolleson said.

Historical markers commemorate diverse topics in Texas history, including events that changed the course of local and state history and organizations and individuals who made lasting contributions to the state. The committee of Sonora community residents Bonnie Lou Campbell, Kari Cloudt, Mary Epperson and Erika Campbell campaigned to bring a marker to Sonora and organized the dedication.

“Our committee was phenomenal, moving the event from highway-side to the station pavilion at the very last minute to accommodate the large number of RSVPs,” said Campbell. “We so appreciate the support of neighbors and ranchers from Sonora, Rocksprings, Del Rio, San Angelo and all parts in between. We also appreciate the numerous descendants of the ’founding fathers of the station’ coming out to this dedication. We feel very blessed to be connected with not only the past, but also with the future of our station.”

The station was established between Sonora and Rocksprings and was in use by 1916, financed in equal parts by the legislature and area ranchers. The earliest scientists lived in tents on site.

The Sonora Station has published numerous significant papers and research results over the last decade such as “Improvement of Sheep Through the Selection of Performance-Tested and Progeny-Tested Breeding Animals” based on its 1950-51 study.

Today advances in genetics and research make it easier than ever for producers to know and select their best animals to breed to– a testament to the importance of the ongoing work that scientists and researchers continue to do.