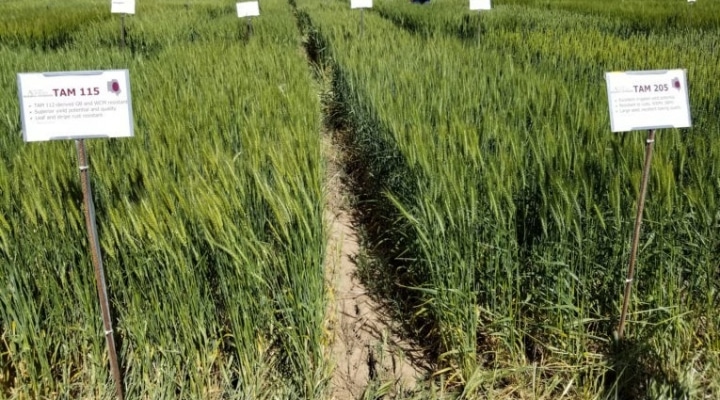 TAM 115 and TAM 205 wheat varieties were added to this year’s Picks List in the High Plains. (Texas A&M AgriLife photo by Kay Ledbetter)

COLLEGE STATION, Texas — Texas A&M AgriLife wheat experts have determined their annual “Picks List” to guide producers as they prepare for fall planting in the near future.

Continuing a long-time tradition, ongoing Picks List criteria include a minimum of three years of irrigated or dryland data in Texas A&M AgriLife regional variety trials across numerous locations. Pick List varieties are based on performance and variety characteristics, and only include varieties designated for grain or dual purpose. Varieties that are used primarily for grazing and forage are not listed.

Varieties placed on a Watch List show promise, but only two years of data is available.

In the Texas High Plains, weather played a major role in wheat production as it roller-coastered from a wet fall to a dry winter to drought during the spring, Bell said.

Dryland fields benefited from March rain, and April freezes resulted in varying degrees of injury, which were most evident on fields planted early with earlier maturing varieties in the central and southwestern production region. Prolonged periods below 24°F, when wheat was jointing, also resulted in damage across the northern High Plains production area.

Conditions rapidly changed in late April. Above average temperatures through May and June drove up the crop water demand, resulting in water stress in both dryland and limited irrigated fields during anthesis through grain fill. Because of warm, dry conditions, disease pressure was minimal during the late spring, however hailstorms across the region resulted in significant hail injury to many regional wheat fields.

Even with extreme environmental conditions, yields were above the long-term average in many areas. Dryland yields ranged from 20 to 50 bushels per acre, and irrigated yields from 20 to 95 bushels per acre, depending on variety, irrigation capacity and precipitation timing and amount.

In the Texas Rolling Plains, Emi Kimura, Ph.D., AgriLife Extension agronomist, Vernon, said the season started with hot and dry conditions in the fall, and soil temperature was not optimum for planting wheat until the first week of October. Dry months continued through December, which reduced winter forage productivity throughout the Texas Rolling Plains. Dryland wheat gradually improved with the spring precipitation during January to March.

Late-freezes in mid-April resulted in the freeze injury in many wheat fields across the region. Furthermore, golf ball-size hail hit spotted areas in the region in early May, which again resulted in the reduced yield potential. Leaf and stripe rust pressures were lower than average. There were some reports of loose smut disease of wheat.

Picks for the Texas High Plains are based on yield performance and consistency over 22 multi-year, multi-site irrigated and dryland trials harvested from 2018-2020.

TAM 115 is a new, large-seeded variety on the 2020-2021 limited irrigated and dryland Picks Lists. It is a dual-purpose variety with very good milling and baking quality that is resistant to leaf rust, stripe rust, stem rust, green bug and wheat curl mite. It also has excellent drought tolerance. It has shown to maintain yield in water limited conditions.

TAM 205 has shown stable yield during the three-years evaluated. It is a dual-purpose variety with a high top-end yield potential, good test weights, very good end-use quality, and good fall forage production. It is resistant to leaf rust, stripe rust and stem rust. It is also resistant to wheat streak mosaic virus and soil-borne wheat mosaic virus. It performed very well in the irrigated trials.

Syngenta Monument has been moved to the Watch List because it did not perform as well in 2019-2020 as in previous years. Syngenta Wolverine is a new addition to the 2020-2021 Watch List. Wolverine is a 2019 AgriPro release with good test weights, resistance to stripe rust and tolerance to leaf rust, and is a high-tillering variety noted for good drought tolerance. Westbred WB4792 is a 2018 release that has been a top yielder in the High Plains Uniform Variety irrigated and dryland trials for the last two years with good test weights.

Varieties removed from 2019-2020 Picks: TAM 304, Gallagher and LCS Chrome. These varieties performed relatively well compared to other non-Picks varieties; however, they did not meet the top 25% criteria over a three-year trial average.

WB 4721 was not widely available for purchase during 2019-2020 season for the Texas Rolling Plains growers. SY Drifter was not included in the 2019-2020 variety trial.

Wheat Picks and other information on the Texas A&M AgriLife wheat program can be found at Texas Small Grains Variety Trials.

Davis recognized as Texas Wheat County Agent of the Year