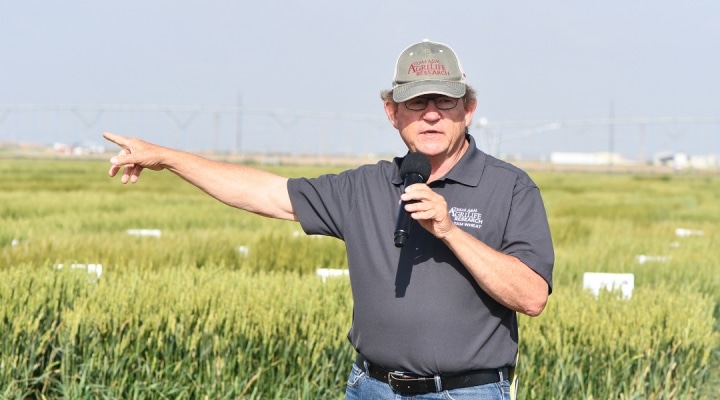 COLLEGE STATION, Texas — Four Texas A&M College of Agriculture and Life Sciences Department of Soil and Crop Sciences plant breeding program development projects have been funded by the U.S. Department of Agriculture’s National Institute of Food and Agriculture, NIFA. These programs are aimed at enhancing sorghum, corn, peanut and wheat cultivars for farmer use.

“This is a fantastic program for advancing our national plant breeding effort,” said David Baltensperger, Ph.D., head of the Department of Soil and Crop Sciences. “We are extremely fortunate to have four projects selected for this program. These projects will make a difference not only for Texas, but for our nation.”

Baltensperger also pointed out that the faculty members leading these grants are all engaged in training future breeders by working with students in each project. Texas A&M offers both a campus-based and a distance plant breeding program that allows students to participate in and get hands-on experience in the breeding process.

NIFA director Carrie Castille, Ph.D., said in the announcement of the grants, “These innovative projects will advance crop production efficiency, healthfulness, product quality and the value of U.S. agricultural plants while increasing farmer profitability and sustainability.”

Ongoing research and the amount of funding for the next three years include:

Transitioning from using DNA markers to detect genetic loci for specific traits in crops to genomic selection approaches to identify the best varieties revolutionized how DNA markers were used in crops about 15 years ago, Murray said.

“Genomic selection is now a standard component of all major industry and many public sector programs accelerated breeding progress,” he said. “With this project, we are transitioning the use of unoccupied aerial systems or drones from measuring specific traits in corn like plant height to use in a phenomic selection approach where we treat hundreds of UAS measurements as markers to predict the best varieties.”

Murray said along with tools and germplasm they are developing in this project, “we believe that this could revolutionize breeding and discover new biological processes in crop adaptation.”

Plant breeding is an incredible science that continues to increase yield, nutrition and efficient use of resources, Rudd said. The rate of gain has slowed in some crops, including wheat, and this reduced gain may be due in part to reduced genetic variability. Ancient wheat relatives have many valuable traits, but these wild grasses are difficult to hybridize with modern wheat.

“These synthetic hexaploids are simply a bridge to bring genes from wild wheat relatives into modern wheat,” he said.

The goal of this proposal is to develop a collaborative public and private research program to improve the productivity and adaptation of grain sorghum hybrids for U.S. producers.

“Given the limited budgets for grain sorghum improvement, collaboration between the public sector and private industry is essential,” Rooney said. “This project facilitates such work with the goal of increasing productivity and profitability while demonstrating the importance of such collaborations to the sorghum-growing community.”

This proposal is an international and multistate collaboration using modern biotechnology tools to help with advancing alleles for resistance to major pathogens and pests affecting peanut production worldwide.

Texas A&M AgriLife has one of the world’s largest collections of peanut wild species, which have useful genes for resistance to disease and tolerance to drought stress, Burow said. In this project, the breeding team will transfer novel wild species alleles from a population developed by Charles Simpson, Ph.D., retired AgriLife Research peanut breeder and professor emeritus at the Texas A&M AgriLife Research and Extension Center at Stephenville, into a set of back-crossed breeding lines sharing a common, popular genetic background. Each possesses a small segment of chromosomal DNA inherited from the wild species parents.

Burow said as a part of the project and with help from colleagues at different institutions, they will screen the involved breeding lines for disease and pest resistance, identify DNA markers diagnostic for these resistances, and identify candidate genes responsible for resistance .

The product breeding lines will be available for marker-assisted pyramiding of alleles into multiple disease-resistant cultivars. Testing will be performed in the U.S. and West Africa.