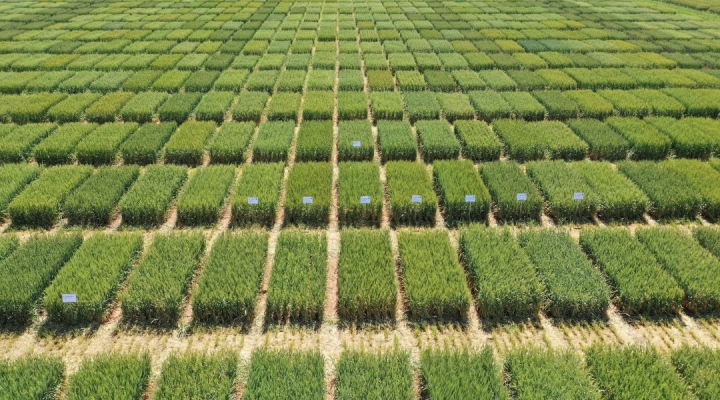 The irrigated uniform variety trial near Bushland gives a perspective on the differences in hard red winter wheat varieties and is a part of what informs the annual wheat “Picks” list. (Texas A&M AgrILife drone photo by Shannon Baker)

COLLEGE STATION, Texas — Persistent drought conditions and forage shortages as well as strong prices for wheat silage and wheat hay have resulted in a large percentage of Texas wheat acres either failing, being chopped or being hayed this year.

Overall, Texas wheat production was down 49% from the previous year because of failed acres and reduced yields. As a result, wheat seed is in short supply, so Texas A&M AgriLife Extension Service agronomists are encouraging producers who are making a variety change or needing to purchase seed for forage to go ahead and reserve seed as quickly as possible.

“Through this program, seed growers were able to apply to recertify wheat seed, which helped alleviate some of the strain on supplies,” Mosier said.

Certified seed is required to pass through field inspections and testing to minimize weed seed contamination and seed-borne disease, as well as verify the identity of the variety, he said. In addition to quality issues with non-certified seed, there are also legal issues producers should be aware of concerning the Plant Variety Protection Act.

“We encourage producers to utilize resources such as the wheat ‘Picks’ list and the Texas Wheat Seed Book to make varietal selections, especially if familiar varieties are out of stock,” Mosier said.

Sticking with tradition, experts with AgriLife Extension and Texas A&M AgriLife Research released their annual “Top Wheat Picks” list for top performing varieties, which are based on a three-year running average and not a single year.

The Texas A&M AgriLife experts annually test how wheat varieties grow under adversity and select top performers. They examine data from the past years’ wheat variety trials coordinated by the Wheat Improvement Programs in Amarillo and Bryan-College Station. Funding for these studies is provided by variety trial entry fees and the Texas Wheat Producers Board.

The Picks varieties must show stability within their target regions over a three-year period. Variable growing conditions such as lack of soil moisture at planting, freezing temperatures during early growth and near the onset of the reproductive stage, terminal drought, excessive moisture during the grain-fill stage, and disease and insect pressure can affect performance in any one growing season. So, the three-year average provides a more accurate picture of performance.

Adversity in wheat growing conditions across the state in 2021-2022

There was minimal winter precipitation through the Texas High Plains, resulting in another dry winter. The few, dry snowfall events provided little moisture, and as a result, much of the region received less than 1 inch of moisture from October through mid-April, Bell said.

Like the winters of 2020 and 2021, prolonged winter drought conditions resulted in many producers pulling cattle off dryland wheat pasture early due to a lack of forage. But because of strong spring 2022 wheat prices, dual-purpose producers were less likely to graze irrigated fields past the first hollow stem as in previous years, she said.

Hail and high winds accompanied late April rainfall, and many wheat acres were injured or hailed out. Late May was unseasonably cool, which was beneficial for late-maturing wheat varieties, but hot and dry conditions resumed in June. Wheat streak mosaic and barley yellow dwarf virus were heavy in many areas. Russian wheat aphid pressure was heavy across much of the Texas High Plains with reports from north of Lubbock to the Oklahoma line.

Overall, there was an increase in failed dryland wheat acres in 2022 due to drought, and most irrigated producers were not able to meet crop water demands due to declining well capacities, Bell said. Regional yields were below the long-term average in most areas depending on variety, irrigation capacity and precipitation timing and amount.

Emi Kimura, Ph.D., AgriLife Extension agronomist, Vernon, said the wheat season was brutal for wheat growers in the Texas Rolling Plains. Depending on the planting timing, many fields received very little rainfall during the growing season until May.

“The yield potential was set for wheat by the time we received the first significant rainfall for the season,” Kimura said. “Forage production was drastically reduced or completely lost in the small grain pastures, while many dryland wheat fields were abandoned due to the severe drought conditions.”

She said increased incidents of spider mites were reported, as the mites thrive in the hot and dry weather. There also were reports of white heads in wheat, which resembled freeze injury. However, this effect was likely caused by the drought stress rather than freeze injury.

“Based on the conversation I had with wheat producers in the Texas Rolling Plains, the 2021-2022 wheat season was equal to or worse than the 2011 drought,” Kimura said.

Wheat grain variety Picks were designated based on performance of varieties in 20 different trials conducted in 2019-2021 under irrigated and dryland conditions.

Because of the below average yields this past year, Bell said they did not select varieties for a “watch list” that typically includes new varieties that are starting to show promising results.

TAM 113 has been removed from the irrigated and limited irrigated lists, but it remains a dryland pick because of solid grain performance, end use quality, forage potential and ability to emerge and tiller under stressful conditions, Bell said. It has resistance to stripe, leaf and stem rusts. TAM 114 is the No. 1 planted wheat variety in Texas, but it has been removed from the dryland list because of lower performance on very tough dryland conditions.

More in-depth evaluation and a complete discussion of the performance of these varieties is available.