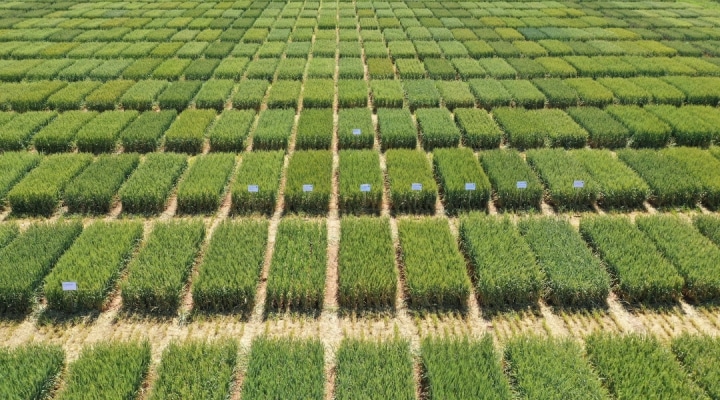 A drone shot of the irrigated uniform variety wheat trial near Bushland gives a perspective on the differences in hard red winter wheat varieties, including those bred by Texas A&M AgriLife. (Texas A&M AgriLife drone photo by Shannon Baker)

COLLEGE STATION, Texas — The Texas A&M AgriLife wheat breeding team once again leads in the development of the varieties producers select to plant across Texas, according to the most recent U.S. Department of Agriculture National Agricultural Statistics Service, USDA-NASS, survey.

TAM 114 remains at the top of the hard red winter wheat varieties, closely followed by TAM 204, according to the Texas Wheat Varieties report released recently. These two varieties led plantings in the Northern High Plains and Southern High Plains, the major wheat-producing regions of the state. TAMsoft 700 topped the survey for soft red winter varieties planted in the Blacklands and Cross Timbers regions.

According to the USDA-NASS report, in 2020, the state planted an estimate of 4.9 million acres of wheat. For 2022, the preliminary estimate is 5.6 million acres.

“The results of the survey clearly show the success of the TAM wheat breeding program and offer insight into the varieties that are performing best for Texas farmers,” said Rodney Mosier, executive vice president of Texas Wheat Producers Board and Association, a funding partner of Texas A&M AgriLife’s wheat breeding program.

“Farmers support the wheat breeding program through the Texas Wheat Producers Board checkoff every year, and it is encouraging to see that investment paying off as TAM varieties perform well in the field and increase in popularity,” Mosier said.

The 2022 Wheat Variety Survey, conducted from December through January, asked producers to report wheat acres planted and to be planted, by variety, for the 2022 crop year. AgriLife Extension funded the survey.

Those figures were compared to 2020 since there was no report generated for 2021, according to the USDA-NASS.

“We are excited to see these figures from NASS,” said Jackie Rudd, Ph.D., Texas A&M AgriLife Research wheat breeder, Amarillo. “Our research aims to create varieties with improved insect and disease resistance, excellence in milling and baking qualities, and improved adaptability and forage performance. This report indicates that the producers believe in the TAM genetics we have developed.”

TAM 114 was bred for the Texas High Plains, as well as western Kansas and eastern Colorado, and also performs well in most other areas of Texas. It is good in dual-purpose grazing and seed systems, tolerating heavy grazing pressure and still maintaining its grain yield and excellent bread quality.

TAM 204 is a beardless wheat bred for the Texas High Plains, Oklahoma and southern Kansas. It is an excellent heavy grazing and graze-out wheat with resistance to wheat streak mosaic virus, wheat curl mite, greenbug and Hessian fly.

Other varieties and their positions were: Gallagher, with 1.9% of the acreage, dropped three spots from 2020 to fifth; SY Razor moved into the sixth slot and contributed to 1.8% of the acreage; Winterhawk tied with TAM 105 at seventh place at 1.6% of the acreage; and Smith’s Gold accounted for 1.2% of the 2022 acreage and placed ninth.

The two centers collaborate closely, so most varieties and breeding lines combine the strengths of both, leading to better varieties with a wider adaptation than either could develop working alone.

Saddle up for season six of Texas Agriculture Matters