Home / DelMarVa / Tetraploids and diploids: which is which? 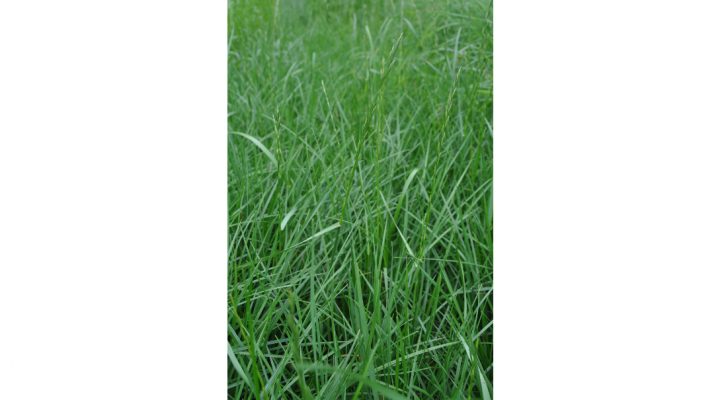 The difference between tetraploid and diploid plants may not be obvious at first glance, but the differences can be very apparent over time in the field and to the cow. (Courtesy Photo)

RONKS, Pa. — Ryegrass is often thought of as the top pasture staple for lush quality and sugars. It establishes fast in cooler, moist regions and is excellent for grazing or mechanical harvest. A high yielder with a longer growing season than some other cool season pastures, perennial ryegrass can also be shorter lived, and is sensitive to drought, temperature extremes, and high grazing pressure. A bunch-type grass, ryegrasses do not spread by rhizomes. They are more succulent in nature than many other grasses – they have a lower proportion of dry matter – which gives them the added sensitivity in growth and management. They are more difficult to dry for hay, for example, and are a heavy user of soil moisture.

Ryegrasses make their mark on rotations, though – whether used specifically as a cover crop or primarily forage. They excel at nutrient scavenging, and improve soil with a root mass that is both dense and deep. Many have found that ryegrass leaves behind a surprising amount of free nitrogen for a non-legume (becoming gradually available after termination), most of which was scavenged deep in the soil and held in the plants’ tissues. This leftover nitrogen and the roots’ soil conditioning impacts yield a great benefit when rotating into a corn.

There are two main types of ryegrasses that together can give us the extra resilience and added productivity push we may be looking for in a pasture: tetraploids and diploids.

Figuring out which type suits you is a bit of a balancing act. Tetraploids have better quality and higher sugars, but diploids offer better ground cover and persistence.

We see this trade-off at work in other crop families, especially clovers – low-growing, dense, spreading and persistently aggressive varieties, versus those that are erect, taller, but less aggressive in regrowth and in the long-term. Your end use and environment will play a big role in what you decide on.

Across these two categories, of course, ryegrasses’ lifecycle varies. They are available in perennial, Italian, and annual types. Perennial ryegrasses (Lolium perenne) last for 2-3 years – a short-term pasture crop. They produce seedheads only once a year, in late spring. Italians (Lolium multiflorum Lam.) are biennials, typically planted in spring and cut several times throughout the first year, then harvested and terminated the following spring. There is no vernalization requirement for Italians to flower, so they will flower throughout the summer. Annual ryegrasses are planted in the fall as a winter annual, often in combination with a small grain or clover, and harvested the following spring.

Diploid varieties have two sets of its chromosomes in each cell. With a smaller cell size and lower water content in each cell than tetraploids, plant features are smaller, seed size is smaller, and the plant will tiller more. As a result, it forms a dense stand that is more competitive with weeds, and can handle lower fertility and wetter conditions.

While tetraploids are more erect growing, diploid plant structure tends to be prostrate, which helps protect stands from animal impact and weed competition. Stands are a little more persistent and perform better in heavier grazing scenarios.

Tetraploids have 4 copies of each chromosome per cell, induced through a breeding process using chemical mutagens. What this means for tetraploids is a larger cell size, and a greater proportion of cell contents (soluble carbohydrates) to cell walls (fiber), so tetraploids are known for improved quality and digestibility and more animal performance benefits. Sugars and starches, the cell contents, are rapidly available for improved rumen function. However, with higher water content in the cells, animals can fill up faster, leading to a lower intake level. They can also be more susceptible to overgrazing because of their high palatability. Recovery is also slower.

Because of their larger cells, tetraploids’ seed size is about twice that of diploids, so seeding rates (and costs) are higher.

Tetraploids don’t tiller as aggressively as diploids do, forming a naturally sparser stand. This makes it a better choice in mixtures with clovers, since the ryegrass is not as likely crowd out its companion. With a slower and less aggressive recovery, legumes have a chance to come back as well.

Their lower competitiveness makes tetraploids a surprisingly good companion for warm season perennial pastures in southern climates. Because the ryegrass has lower heat tolerance, production drops back in the summer, letting the warm season grass shine. Then with cooler fall and spring weather, the tetraploid can start to play a more dominant role as the warm season grass goes dormant. A diploid in this scenario might eventually thin out the other species.

Blends are often the ideal way to go – and not just in ryegrasses. Blends make for more diversity and more production stability as the stand faces variable conditions.

Blends give you the chance to combine the best of both worlds, along with the hope that when one variety struggles, the others pick up the slack. Combine the high sugars and leafiness of tetraploids with the winter hardiness, strong spring growth, and improved standability of diploids. Diploids also add to the ease of drying the mix as a whole. BG 24T, for example, is a perennial blend that uses diploid varieties for a dense stand, and tetraploids to boost overall palatability, productivity, and disease resistance. BG 34, a similar blend from Barenbrug, is made up entirely of diploid varieties, and is good for both intensive grazing and cutting.

Two of our Italian ryegrass ploidy blends, Green Spirit and KingFisher Allegro, often top the charts for quality in research trials. In the spring of 2016, these fall planted blends beat all the annual ryegrass, both scoring 70.9 in TTNDFD (hint: TTNDFD scores – a new and more comprehensive measure of fiber digestibility – above 42 are considered highly digestible forage). Of course, Italian ryegrasses have a digestibility advantage over annual ryegrasses to begin with – they grow vegetatively longer than annual ryegrasses (though shorter than perennials), which are actively going to head the spring after they were seeded.

The difference between tetraploid and diploid plants may not be obvious at first glance, but the differences can be very apparent over time in the field and to the cow. Each has its strengths, so make sure you place each to its greatest advantage.

Set calves up for long-term success