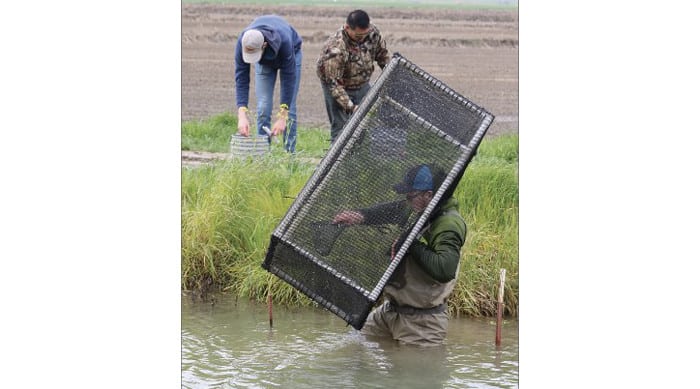 Jordan Colby, an undergraduate researcher at the University of California, Davis, retrieves juvenile salmon from a cage held at River Garden Farms in Knights Landing. The fish had been living in nearby flooded rice fields. Researchers are choosing which fish to implant with microtransmitters, which will allow them to be tracked on their journey to the Pacific Ocean. (Ching Lee, California Farm Bureau)

Scientists at the University of California, Davis, are finalizing their fieldwork on an experiment to find out what management practices farmers might adopt in their fields to maximize fish survival.

At River Garden Farms in Knights Landing last week, researchers waded through a water-supply canal where young chinook salmon were being held in cages. The scientists were getting ready to implant about 1,000 of the 12,000 fish with microtransmitters for tracking.

Since their arrival in February from the Coleman National Fish Hatchery in Shasta County, the then-2-week-old fish had spent most of their time in 12- to 18-inch flooded rice fields—until recent warming temperatures necessitated their move to the deeper canal, said Paul Buttner, environmental affairs manager for the California Rice Commission, a collaborator on the project.

“The end game, of course, is to release these salmon into the river,” he said.

From the Sacramento River, researchers will monitor and study the fish as they reach adulthood and try to make their way to the Pacific Ocean. The transmitters, which cost $300 apiece, will track the fishes’ survival rate, where they go and where they spend time, said Andrew Rypel, UC Davis associate professor and director of the Center for Watershed Sciences.

Rypel and his team want to find out if growing juvenile salmon in flooded rice fields, where there’s an abundance of food to bulk them up big and fast, would allow the fish to survive better on their journey to the ocean.

“We think that that may make a difference,” he said.

Ultimately, they want to create standardized management practices for use on farms near Sacramento River tributaries. Farmers could then enroll in a fish conservation program, such as those under the U.S. Department of Agriculture, “prepare their fields in a certain way to maximize the benefit for fish and give a helping hand for conservation,” Rypel said.

Researchers tested four different treatments to determine what farmers could do “to make their fields the most fish-friendly” and to get “the most bang for your buck,” he added.

“In the past, it was suggested that when you take fish from a hatchery and then release them, you have a 50% mortality rate, and so we wanted to see is that true when we release them on rice fields,” said Rachelle Tallman, a UC Davis graduate student working on the study.

Before flooding the fields, researchers created four types of experimental plots: fields with deep trenches running through them to provide cooler temperatures and fish refuge from bird predators; woody debris from discarded Christmas trees in fields also for bird refuge; trenches with woody debris; and flooded fields with no treatment.

Though more analysis is needed, Tallman said most of the plots recorded fish survival rates between 70% and 78%, which she called encouraging because researchers initially worried that the woody-debris method would show the highest survival rate.

“When you’re thinking of a practice standard, that’s a lot to ask of a farmer to do, is to put a ton of trees out in their field,” Tallman said. “So I think it actually makes it easier in the sense that you can just process your rice and leave it, add water and hypothetically add fish, and it would show a similar survival to someone who maybe did more.”

In addition to tagging the 1,000 fish with microtransmitters, researchers marked other fish—depending on their size—by clipping their fins or by inserting unique ID tags similar to barcodes that they could then scan. Not only do they want to track the ones making their way to the ocean, Tallman said, but they want to track how many fish are dying through time.

This is the second year researchers have attempted to study the fish in rice fields. Last year, they placed some 30,000 fish in fields inside the Yolo Bypass, but flooding in the bypass dispersed the fish, thwarting their ability to study how well the fish survived in rice fields. This year, researchers did their fieldwork on the dry side of the levee so that it wouldn’t be flooded, though Rypel said they think the wet side holds the most benefit for fish because those fields flood naturally, allowing fish to come on and off of them by themselves.

These latest efforts to help struggling salmon populations come after more than 15 years of cost-share programs in which rice growers changed the way they farm to benefit birds, Buttner said. Farmers recognize that salmon runs are in decline and that if they don’t do something to help them, “it could really start to affect a lot of things in terms of the ability to divert water for agriculture,” he added. This current research, he said, stems from farmers’ desire to do for fish what they did for birds.

The study is funded through a grant from the USDA Natural Resources Conservation Service, with contributions from a diverse group that includes the Almond Board of California, which also recognizes the need to help fish, with rice fields potentially providing an ideal habitat, Buttner noted.

“(Almond growers) also realize that they need to use water, and if the salmon situation doesn’t get better, that it could even affect them,” he said.

If study results show promise, researchers could develop practice standards that would then be incorporated into an NRCS program to which growers could apply. Then organizations such as the Almond Board could potentially invest in developing fish habitat once growers figure out how to do it, Buttner added.