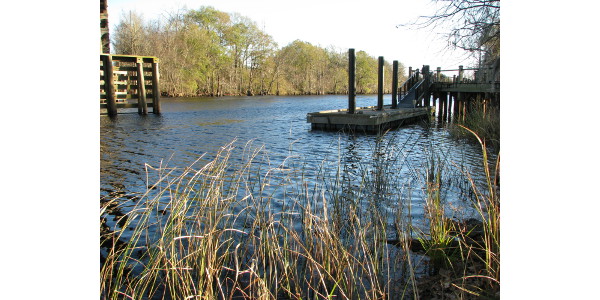 “This new testing protocol allows our scientists to determine if the origin of fecal bacteria is swine, bovine, human or dog, which means that resource managers can be much more precise and efficient in finding the source of contamination,” Callahan said.

“This new test allows us to use existing staff expertise and technology to determine, for example, whether bacteria came from swine or bovine,” Cole said. “We then report the results to the entity in charge of monitoring that watershed and they can investigate and take action.”

Speed is another advantage of the new test. Results take hours rather than days, which Callahan says is critical to reducing health risks from contaminated water.

“The testing gives municipalities information quickly to determine if a river, pond, lake or any other surface water body is unhealthy for recreation,” she said.

“We are 10 months into a year-long bacteria monitoring protocol to see if bacteria sources have seasonal influences. The test has allowed us to say with greater certainty if bacteria are prevalent in surface waters compared to relative amounts. I expect that we’ll be able to remove two monitoring stations based on the data, which will allow us to reallocate funds,” Ferguson said.

The qPCR testing protocols have been around since 2007, but the Clemson lab has spent the past two years reviewing scientific journals, developing procedures, calibrating laboratory equipment, fine-tuning the sample intake and reporting process, and obtaining accreditation from the USDA Animal and Plant Health Inspection Service.

The Clemson lab accepts water samples from anywhere in the state of South Carolina. It will also take samples from out of state. A client intake form and service agreement must be approved by both parties. More information can be found at the project website, https://www.clemson.edu/public/water/watershed/projects/qpcr.html.