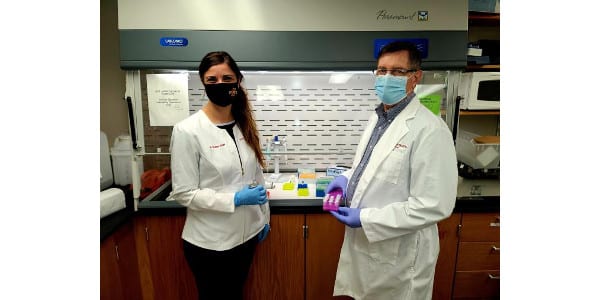 AMES, Iowa — Dr. Silvina Arias and Dr. Charles Block have received a $38,882 grant from the American Seed Trade Association’s Seed Science Foundation (SSF) to develop a test that will differentiate between two closely-related corn bacteria.  One of the bacteria causes Stewart’s wilt, a disease that prevents corn seed from being exported. The other bacterium is a close relative that does not cause disease on corn.  The problem with current testing methods is that they cannot tell the two apart, potentially resulting in false-positive test results.

“The industry agrees that this is very important and impactful work,” said Samantha Thomas, SSF Board Member.  “An improved method could resolve the seed import rejections or destructions associated with false-positive tests known to occur with currently available testing methods.”

Corn exported as seed for planting usually needs to meet the importing country’s quality requirements. The most frequent requirement is to verify freedom from Stewart’s wilt, a bacterial disease caused by Pantoea stewartii.

“What many don’t know is that Pantoea stewartii has two subspecies, stewartii which causes a leaf blight on corn, and indologenes which does not cause disease,” Arias said. “The standard lab test cannot tell one from the other.”

There are many published DNA tests for Pantoea stewartii but most have the same problem in not being able to separate the two subspecies.  The Seed Science Center Seed Health lab has an assay that can separate the two, but it has not been rigorously tested on seed.

“Our goal is to develop a reliable seed health assay that works well with all types of seed (dent, sweet, and popcorn) and seed treatments,” said Block, SSC Seed Health Testing Coordinator. “The intent is not to replace the standard ELISA test, which is cheaper and quicker, but to have a supplemental follow-up method available.”

The successful award proposal titled “Validation study of a Real-Time PCR method for the detection of Pantoea stewartii subsp. stewartii (Stewart’s wilt) in Maize Seeds” follows a journal publication from 2019 by Block in collaboration with two USDA scientists, Drs. Narinder Pal and Candice Gardner from the Plant Introduction Station in Ames, to develop a PCR method for differentiating the two subspecies.

Arias said the research’s focus is to optimize, extend the applicability, and conduct an interlaboratory validation of the DNA test method to fully verify performance criteria according to the National Seed Health System (NSHS) validation guidelines.

They hope to have many questions answered by mid-December 2020 such as the best DNA extraction method, the lower limit of DNA detection in seed extracts, and how the DNA test compares with ELISA sensitivity. The end goal is to have a robust set of validation data by spring 2021 so that the U.S. National Seed Health System can accredit the method.