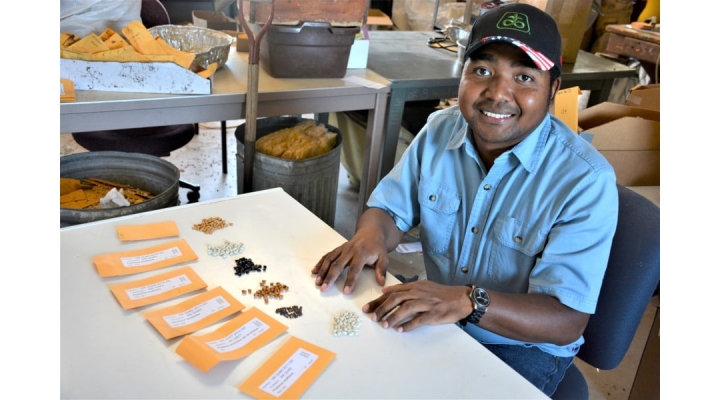 COLLEGE STATION, Texas — Tepary beans are among the most drought-tolerant legume crops in the world, but at one time, they were almost an endangered species in the U.S.

Waltram Ravelombola, Ph.D., a Texas A&M AgriLife Research organic and specialty crop breeder at Vernon and in the Texas A&M Department of Soil and Crop Sciences, is one of a few scientists funded by a U.S. Department of Agriculture Agricultural Research Service grant to bring tepary beans into modern cropping systems and diets.

The legume — pronounced tep-uh-ree — is an ancient crop native to the northern part of Mexico and the southwestern part of the U.S.  The beans can be multiple sizes and colors, like pinto or black beans, but they offer drought tolerance other legumes don’t, Ravelombola said.

Teparys can be consumed as beans by humans or as forage by livestock, providing better nutrition content than cowpeas and guar. Like cowpeas and guar, tepary can fix nitrogen in the soil.

Yet currently, Ravelombola said, no large supplies of seed exist to be planted.

He is utilizing 265 tepary bean plant transfers he obtained from the USDA Germplasm Resources Information Network for his “Developing High-Throughput Phenotyping and Genomic Resources for Adaptation to Dryland Conditions in the USDA Tepary Bean Germplasm” project.

“Our goal is to begin with these seeds and develop tepary bean cultivars that are better suited to the dryland regions of the U.S.,” he said. “We want to study the adaptations of the existing germplasm under dryland conditions, to establish a high-throughput phenotyping platform for drought stress, biomass and yield prediction, and to develop genomic resources for dryland adaptations.”

Ravelombola said he will use drone technology for field phenotyping, perform whole-genome resequencing to identify important genes and genetic markers, and then pursue genomic selection in tepary beans. Right now, little is known regarding the crop’s genome.

When the project is complete, Ravelombola said, tepary bean cultivars adapted to various areas will be of interest to pulse growers, seed industries and food companies across the U.S.

Ravelombola said his research began when he had a discussion with a colleague at Vernon concerning tepary bean adaptations to the region. The USDA-ARS grant allowed him to pursue a better understanding of the crop’s adaptations to the dryland farming system using field phenotyping, genomics and high-throughput phenotyping. Tepary bean studies remain limited.

However, getting the beans to the point of widespread commercialization won’t be an easy process.

Ravelombola said it will take at least eight growing seasons; there could be more than one growing season per year, depending on climate. The first two seasons will be spent identifying adapted germplasm, and season three will be dedicated to population development. The next few seasons will be used to advance population and selection, with the final two years dedicated to yield trials.

This lengthy process started when Ravelombola planted a tiny plot of beans last year and hand-harvested them. This year he has three-quarters of an acre dedicated to tepary beans, which he planted on June 8 at the Texas A&M AgriLife research farm in Chillicothe. Those beans will be harvested in September and used to grow the following year of research.

Ravelombola said the beans will not receive any irrigation. He will monitor how much moisture they receive from rain to know how well they will produce in different regions under different moisture levels.

Eventually, because of their legume properties, he said he would like to try them as a cover crop as well. But that will have to wait until the seed availability increases over the years.

McLellan recognized as Texas Wheat County Agent of the Year