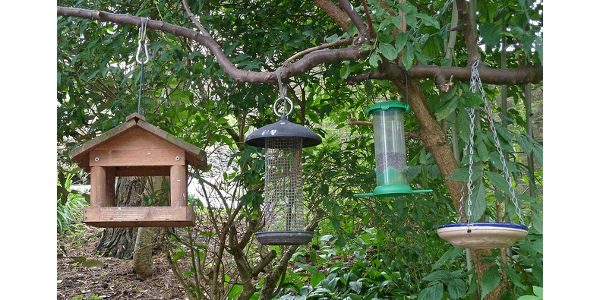 One easy way the public can help reduce the potential spread of HPAI is to remove outdoor bird feeders. Though there isn’t yet any widespread recommendation from state agencies to do so, temporary removal of these food sources could be helpful, especially for anyone who has highly susceptible species – domestic poultry, raptors or waterfowl – living nearby. (Tim Green, Flickr/Creative Commons)

LANSING, Mich. — As Michigan continues to respond to detections of highly pathogenic avian influenza – commonly referred to as “bird flu” – some residents are asking questions about how best to keep themselves, their poultry flocks and wild bird populations safe. This is of greater interest now, as popular passerines (including many songbird species) make the spring migration back to Michigan and seek out food sources such as backyard bird feeders.

With HPAI confirmed in wild birds and domestic flocks in several counties throughout Michigan, wildlife and animal health experts in the state’s departments of Natural Resources and Agriculture and Rural Development have been fielding increased calls about the HPAI virus. Follow the current status of HPAI in Michigan counties at Michigan.gov/BirdFlu.

Megan Moriarty, the state wildlife veterinarian with the DNR, said it is important to note that while all birds are potentially susceptible to HPAI, some are more likely than others to become infected and die. Domestic birds and some wild birds, like waterfowl, raptors and scavengers, are highly susceptible and have been particularly affected by this disease.

“Current research suggests songbirds are less susceptible to highly pathogenic avian influenza and are unlikely to play a significant role in spreading the virus,” Moriarty said. “However, much remains unknown, and surveillance and testing for HPAI in this group of birds is less common, resulting in a knowledge gap.”

One easy way the public can help reduce the potential spread of HPAI is to remove outdoor bird feeders. Though there isn’t yet any widespread recommendation from state agencies to do so, temporary removal of these food sources could be helpful, especially for anyone who has highly susceptible species – domestic poultry, raptors or waterfowl – living nearby. Similarly, removal could be a wise choice for those who observe high-risk species like blue jays, crows or ravens hanging around backyard bird feeders. This temporary removal of bird feeders and baths may only last for the next couple months, or until the rate of HPAI spread in wild and domestic birds decreases.

“If you’re concerned about this virus and want to act from a place of abundant caution, removing your bird feeders for now makes sense, but it isn’t yet a critical step,” Moriarty said. “With warmer springtime weather on the way, too, birds will have more natural food sources readily available to them, so chances are many people will be taking down feeders in a few weeks anyway.”

If people choose to continue using their bird feeders, please keep this guidance in mind:

Anyone who notices what appear to be unusual or unexplained deaths among wild bird populations is asked to report the information either by:

Highly pathogenic avian influenza is highly contagious and can be spread to domestic flocks by wild birds, through contact with infected poultry, by equipment, and on the clothing and shoes of caretakers. Make sure domestic poultry (e.g., chickens, turkeys, geese and ducks raised for the production of meat or eggs) is separate from and has no contact with wild birds.

According to the U.S. Centers for Disease Control and Prevention, these HPAI detections do not present an immediate public health concern. No human cases of this strain of HPAI virus have been detected in the United States. Also, no birds or bird products infected with HPAI will enter the food chain. As a reminder, all poultry and eggs should be handled and cooked properly, with a safe cooking temperature of 165 degrees Fahrenheit.

“It is vital for poultry owners to take every step possible to keep wild birds away from their flocks and follow other biosecurity measures,” said State Veterinarian Nora Wineland. “Simple, yet effective mitigation strategies help protect not only your flock but others around the state. We have to work together to keep Michigan’s domestic and wild bird populations safe and healthy.”

Domestic bird owners and caretakers should watch for unusual deaths, a drop in egg production, a significant decrease in water consumption or an increase in sick birds. If avian influenza is suspected, immediately contact MDARD at 800-292-3939 (daytime) or 517-373-0440 (after hours). For more information, visit Michigan.gov/BirdFlu.