Home » Temperature trends flip for 2nd half of Sept. 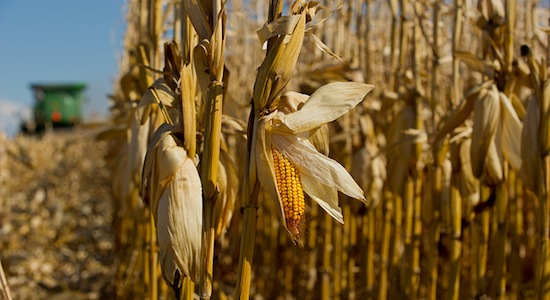 Much drier weather across much of the Central U.S., including a large portion of the Corn Belt, has given way to wetter than normal weather for the second half of September. (United Soybean Board, Flickr/Creative Commons)

Following a warmer than normal first half of September in the West and colder than normal first half in the East, the temperature trends have flipped. Looking at the temperature maps below, the trends have almost exactly switched places with warmer weather in the East and colder weather in the West for the second half of September; we’ve even seen some of the first winter weather advisories of the season for the mountains in the West. Precipitation has also fluctuated from the first half to the second half of September. Much drier weather across much of the Central U.S., including a large portion of the Corn Belt, has given way to wetter than normal weather for the second half of September. However, there will still be some drier trends in the eastern portion of the Corn Belt which should help the harvest season to proceed relatively undisturbed for the next 7-10 days. However, the western half of the Corn Belt will see a a slow-moving cold front begin to interact with the region this weekend. Showers and thunderstorms will impact the region for several days leading into next week which could halt or slow down harvest activities, but the rain is very much needed across parts of the region.

The change to warmer weather across much of the Corn Belt over the past week should have helped in maturing the corn crop, although this year’s maturity rate is still behind both the pace of last year and the 5 year average. It’s still a bit early in the harvesting season for the Dakotas, but a hot and dry summer with expanding drought conditions in the High Plains is likely to have slowed down the pace of maturity for this region. As of the week-ending September 17th, the overall corn crop maturity is 34% for the 18 major corn-producing states, while last year at this time maturity was 50% and the 5-year average is 47%.

Despite drier weather during the first half of September, corn harvest continues to run generally behind the 5 years average, with a few exceptions. Illinois, Indiana, Iowa, Kansas, Kentucky, Michigan, Minnesota, Missouri, Nebraska, North Dakota, Ohio, Pennsylvania, South Dakota, and Wisconsin are all running behind last year’s harvest pace according to the USDA’s September 18thCrop Progress Report. Out of the 18 major corn-producing states, approximately 7% of the crop has been harvested compared to the 5-year average of 11%. Colorado harvest is about on pace with average and ahead of last year, Michigan is ahead of last year and average as are North Carolina, Tennessee, and Wisconsin.

No weather report this week would be complete without a mention of the tropics. Hurricane Jose took a journey that paralleled the East Coast of the U.S., but didn’t make landfall, with coastal flooding and beach erosion being the biggest impact from Jose. Meanwhile, Major Hurricane Maria devastated some of the Caribbean Islands previously impacted by other major hurricanes like Jose and Irma. Of note, Maria made a direct hit on Puerto Rico yesterday (September 20th) and impacts from that landfall are still being assessed. As of this morning, Maria is not forecast to make landfall in the U.S., although like Jose, could cause some coastal flooding and beach erosion along the East Coast. However, Maria will still need to be monitored as forecast tracks can and do change. Regardless, the tropics will continue to warrant watching as forecast models hint at more trouble brewing possibly in the 7-14+ day time frame. Meanwhile, recovery efforts are ongoing in southeast Texas (Harvey) and Florida (Irma).