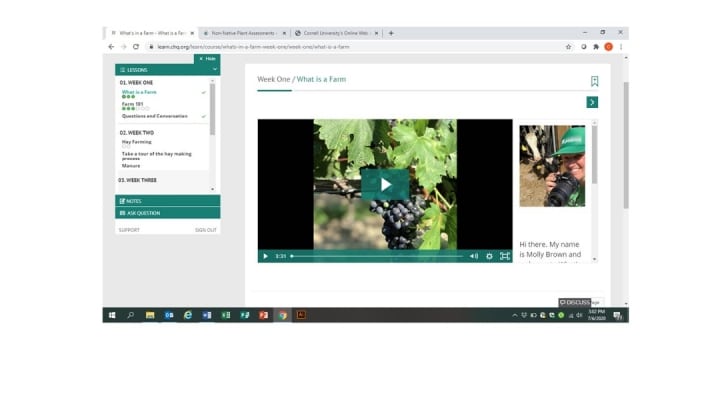 Shown above is an inside look at the first week of “What is a Farm,” a curriculum offered by the STORY program, and shared through Chautauqua Institution’s Learning Management System.

JAMESTOWN, N.Y. — What do modern farming practices, invasive insect species, and robot fashion all have in common? They are all curriculum found in the Science Technology Opportunities for Rural Youth (STORY) curriculum. Molly Brown, 4-H Educator with Cornell Cooperative Extension of Chautauqua County, began teaching with the STORY program last year as part of a three-year, grant funded by the Ralph Wilson Jr. Foundation. While the program was originally envisioned as live-teaching encounters, it has been restructured to meld with the needs of the community while facing a pandemic.

“This year, we’re partnering with Chautauqua Institution and made STORY into a type of virtual programming that is very hands on and it’s actually not face-to-face,” Brown explains. “We’re not doing any of it with Zoom. Instead, there are discussion boards and interactions between me and the kids.”  Through their Learning Management System, Chautauqua Institution is making the STORY curricula available to the public. Learners do not need to be a member of the Institution in order to purchase and participate in the program. Proceeds from the sale of STORY curricula will be shared between Chautauqua Institution and Cornell Cooperative Extension of Chautauqua County. More information is available at https://learn.chq.org/.

“Chautauqua Institution is holding all of this really incredible education so that even though they are not doing in-person programming this season, people can still purchase and be a part of the programming,” Brown shares. “You can go through it at your own pace, and if you have questions you can message me and I’ll get back to you.”  Videos and printable activities help round out each interactive adventure. The three courses Brown has assembled involve using robots and fashion to promote healthy body image, learning about farm anatomy and modern agriculture, and invasive species in our region. The courses will be released one at a time in the Chautauqua Institution’s Learning Management System. “The first one that launched is invasive species, and we’re doing a citizen’s science program to have the kids build mosquito traps and put them on their properties,” Brown explains.

The traps will collect a variety of mosquitoes and potentially one of particular interest: the Asian Tiger Mosquito. This highly-invasive species was introduced to the United States from Asia in the mid-1980’s and is capable of carrying and transmitting disease. They can be trapped safely by creating the right environment for mosquitoes to lay their eggs. Participating in this program also helps Cornell University track the prevalence of this mosquito in the area. “Once we have eggs, we hatch the eggs and put the lid of the trap on and raise the mosquitos,” Brown shares. “And then we freeze them and find out if we have Asian tiger mosquitos. All the research goes back to Cornell.”

The STORY Program is one of many programs offered by Cornell Cooperative Extension of Chautauqua County (CCE-Chautauqua). CCE-Chautauqua is a subordinate governmental agency with an educational mission that operates under a form of organization and administration approved by Cornell University as agent for the State of New York. It is tax-exempt under section 501(c)(3) of the Internal Revenue Code. The association is part of the national cooperative extension system, an educational partnership between County, State, and Federal governments. As New York’s land grant university Cornell administers the system in this state. Each Cornell Cooperative Extension association is an independent employer that is governed by an elected Board of Directors with general oversight from Cornell. All associations work to meet the needs of the counties in which they are located as well as state and national goals. For more information, call 716-664-9502 or visit our website at www.cce.cornell.edu/chautauqua. Cornell University Cooperative Extension provides equal program and employment opportunities.