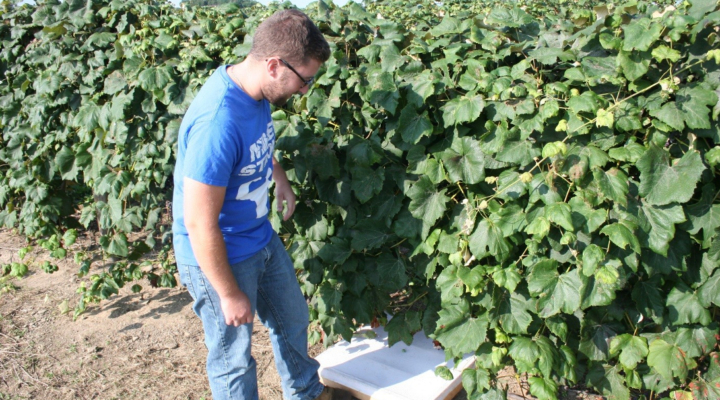 JAMESTOWN, N.Y. — Historically (early 1900s) grape rootworm (GRW) was the major insect pest of grapes growing in New York and surrounding states.  Adults do some minor leaf feeding in early to mid-summer. However, the grape rootworm spends most of its life cycle in the larval stage, feeding underground on grape roots, which can reduce vine vigor or even cause vine death at high densities.  For various reasons, including the seasonal use of broad-spectrum synthetic insecticides, the pest status of GRW declined during the second half of the 20th century.

Research conducted in the Lake Erie Region has helped growers implement the use of insecticides that are more pest specific as well as reduce the number of applications needed during the season.  Since GRW has not been the target pest, this has led to GRW damage to increase dramatically in recent years, especially in the Lake Erie Grape Belt.  Because adults and their feeding damage are not easily observed without extensive scouting, and feeding by larvae is done out of sight, it is likely that New York grape growers greatly under estimate the impact of GRW.

While grape rootworm management was not part of the LERGP’s current SCRI project, Efficient Vineyard, project team members saw the potential to use technology from the project to locate potential GRW populations by identifying areas of the vineyard with lower vine size.  Vineyard blocks involved in the GRW project have been assessed annually using NDVI (Normalized Difference Vegetation Index) sensors mounted either on a grower’s tractor, or on a John Deere Gator operated by LERGP staff since 2015.  This data is then compiled into maps, which show relative vine size, or management zones for vineyards involved in the project.  These maps also allow for comparison of changes in vine size that may occur over time due to treatment/no treatment of grape rootworm populations.

Using these maps, Tim Weigle, NYS IPM Program, was able to identify areas of smaller vine size within a vineyard and set up a scouting regime in that area.  Scouting for the adult GRW is conducted on a weekly basis  beginning in early June to determine first and peak emergence dates, as well as, last capture date (which can go into September) for vineyards not receiving insecticide applications for control of GRW.

As shown in photo, the maps produced through yearly NDVI scouting are a valuable tool in determining the effect of management strategies on vine size and the total area affected by GRW management strategies over a span of years.  The total area affected by grape rootworm decreased from 2015 to 2016 as shown by the area identified with orange and yellow as a result of treatments targeting GRW. Looking only at the map developed in 2017 it would be easy to assume that the grape rootworm populations have moved from the left side of the vineyard to the right.  However, when combined with weekly GRW scouting information, GRW populations were found to have decreased from 2016 to 2017 in the left side of the block and no GRW were not found in the right side of the block where relative vine size had decreased.  The cause of the decrease in vine size in 2017 is thought to be a combination of drought conditions during the 2016 growing season and competition from the trees found on the vineyard edge.

This identifies a very important aspect of what information an NDVI map can provide.   Without calibrating the map through measuring vine size during dormant pruning, the map will only provide vine size relative to the other vines in the block, not a hard number like two or three pound vines.  It also should not be used to monitor pest populations like GRW without scouting data to assist in determining the presence of the pest.  When working with growers that are new to NDVI mapping, it has been determined that the maps are immediately useful for identifying potential problem areas within a vineyard block.  Growers can then work with a member of LERGP to determine the root cause of the problem.  For more information on the work of the Lake Erie Regional Grape Program and the Efficient Vineyard project, please go to https://www.efficientvineyard.com/