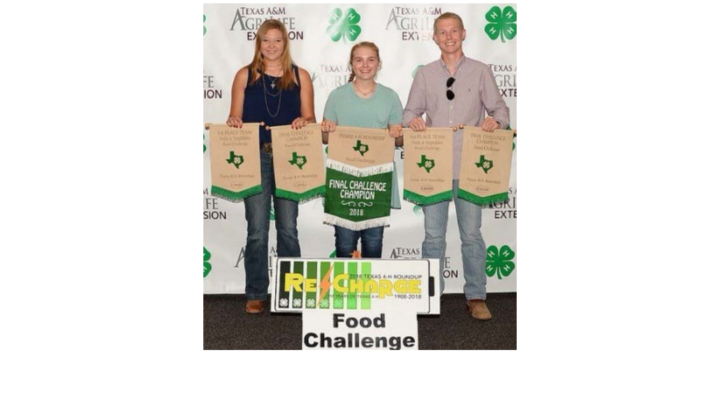 The team, consisting of Jillian Pfeuffer, Allie Treadwell and Jamie Treadwell, all of Christoval 4-H club in Tom Green County, won the national competition after prevailing at the State 4-H Roundup in College Station earlier this year.

“Winning state was especially gratifying for the team as it was the first time all three of them had competed together,” said Dr. Morgan Treadwell, who coached the team with husband Brian Treadwell and Sandra Pfeuffer. “But by the time nationals came around, it looked like they had been working together for years.”

Morgan Treadwell, a Texas A&M AgriLife Extension Service range specialist in San Angelo, said the team had to scramble for its state competition after one of its original members dropped out.

“They asked Jillian to join the team in May, but before long it seemed like the three of them had been working together for years,” she said.

After winning state, the team was invited to compete in the Great American Seafood Cookoff in New Orleans, where they took second place.

“I think the fact they didn’t win actually gave them greater incentive and drive to do even better at the national competition,” Morgan Treadwell said. “They were also fortunate in that they got support from pretty much the entire AgriLife Extension office in San Angelo.”

Pfeuffer said she enjoys participating in 4-H food challenge contests because they show her how to cook new and creative dishes.

“The challenge is based in the show Iron Chef, where contestants get ‘mystery’ ingredients and are expected to prepare a dish from them,” she said. “You can also select a few ‘pantry’ items to add to the recipe, which you have 40 minutes to prepare.”

For the food challenge competition, the team prepared a Fredericksburg Pork Salad using a pork chop, rice, vegetables and a fresh peach. They chose parmesan cheese as their pantry item, melting and layering it into the form of a cup in which to place the meat and vegetables. Using the peach, they made a chutney topping.

The contest also included a presentation on food and kitchen safety, the nutritional value of the recipe based in the U.S. Department of Agriculture’s MyPlate nutrition criteria, plus an accounting of the meal’s cost. The team was judged on innovation, technique, food and kitchen safety, cleanliness and other criteria as well as the content and quality of their presentation on the recipe’s nutritional value and benefit to human health.

Allie Treadwell, team captain and a 4-H Youth Health Ambassador who plans to become a nutritionist, said winning the National 4-H Food Challenge was the culmination of many hours of preparation and teamwork.

“We all took the competition seriously and made our best effort to get the most out of the time we had working together to prepare,” she said. “We weren’t scared to say when we thought something wouldn’t work and be honest in our criticism. Then we found a way to fix it.”

Allie Treadwell said her parents, along with Sandra Pfeuffer and Chef Marc Daniels of the Community Hospital in San Angelo, were all instrumental in supporting and preparing the team.

“Our parents got us the items we needed, took us to the practices, provided guidance and helped us with our presentation,” she said. “And Chef Marc taught us new kitchen skills and gave us ideas we could use during the competition. As team captain, I mainly coordinated team practices and worked with others to get together whatever else we needed so we could compete. It was a real team effort.”

She said this was the third year she has competed in the food challenge, and one of its greatest benefits has been in letting her hone her public speaking skills.

“The first time I found out I needed to speak in public during these competitions, I almost ran away,” Treadwell said. “But after a while I got more comfortable and worked on improving my speaking skills. Now I’m comfortable speaking to anyone – from people my own age to the contest judges to adults.”

Jamie Treadwell said he enjoyed competing at the national level as it gave him the opportunity to meet youth from other states and to have new experiences.

“It was fun to meet new people from other teams and to compete with them,” he said. “I liked the feeling of the competition and teamwork and want to bring that to whatever I might choose to do in life. I don’t think it will involve cooking, but I know I can apply those life skills to anything.”

He said while the cooking shows have been fun, he also wants to expand his skills in public speaking and range evaluation along with continuing to employ his math skills.

“In fact, we have merged the district-level food challenge with the San Angelo Stock Show and have made that an invitational event to qualify for the statewide competition,” Branham said.

He also noted food challenge teams can be from three to five participants, so it was an even greater achievement that a three-person team took first place in national competition.

“The structure of this contest promotes not only food preparation skills, but also teamwork and problem-solving under a time limit,” he said. “It’s a great way to hone a variety of life skills.”