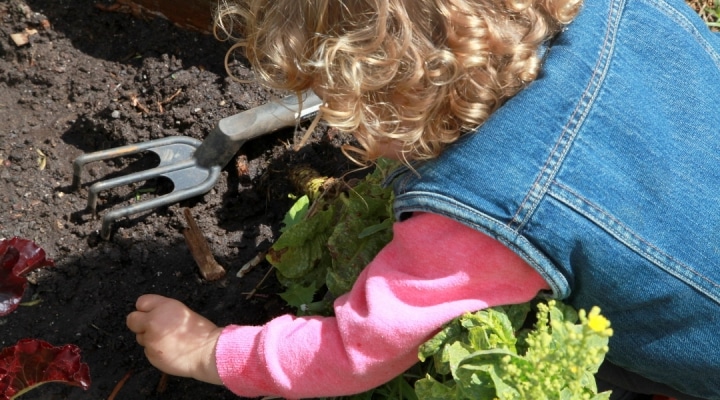 “We’re out here helping beautify the city and teaching kids how to invest in the community in the right way,” said Keith Johnson, who organized a group of fraternity members to volunteer. “If you don’t take pride in your community, no one will.” (Stock photo via d-olwen-dee, Flickr/Creative Commons)

WASHINGTON PARK, Ill. (AP) — Derissa Davis’ energy seemed to know no bounds on May 8 as she pursued her community’s vision of turning an abandoned lot into a vegetable garden that will serve families in the surrounding food desert.

“Everything we grow, we’ll give away,” said Davis, a fourth grade reading teacher at James Avant Elementary School.

The idea for the Tiny Children’s Garden started with a group of third graders who sent letters to the village mayor describing what they’d like to see change about their community, and the idea for a community garden popped up.

Parts of Washington Park are in a food desert, meaning the village has a high number of households without vehicles or nearby access to a grocery store. In the village’s western section, nearly 23% of households don’t have a vehicle and live more than a mile from a supermarket. Much of the surrounding East St. Louis-area also qualifies as a food desert, according to the federal government’s definitions.

To build a garden that could directly address this problem, students needed a space. That’s where Davis came in.

She paid $1,700 out of her own pocket in a 2019 St. Clair County auction for a third of an acre people had been using as dumping ground.

Debris from broken down cars and thick brush dominated the plot at 4701 Forest Blvd. The weeds were taller than Davis, rising much higher than her elementary school students.

She set about mobilizing volunteers and donors to clear the land, eventually recruiting help from charitable groups, sociology students from Southern Illinois University Edwardsville and area fraternity members. By early 2020, they had the plot cleared.

Then the COVID-19 pandemic brought a halt to school and all its extracurricular activities. The Children’s Tiny Garden would have to wait. And on Saturday, a year after they intended to start planting, volunteers such as Keith Johnson, chairman of the Belleville-O’Fallon Kappa Alpha Psi Fraternity, were at the garden building and filling raised beds.

“We’re out here helping beautify the city and teaching kids how to invest in the community in the right way,” said Johnson, who organized a group of fraternity members to volunteer. “If you don’t take pride in your community, no one will.”

Johnson and his fraternity were just one of the groups Davis recruited. She enlisted the help of Connie Frey Spurlock, director of the Successful Community Collaborative at SIUE. The collaborative enlists students to help with community projects around southwestern Illinois.

Davis also successfully applied for support from a St. Louis-based regional nonprofit, Gateway Greening, which donated all the materials and some labor for six 4-by-12-foot raised beds. She proved in her application that she had the resources and community support to keep the garden going long-term.

Yet another volunteer, Pastor Willie Stallworth of the Lansdowne Community Initiative in East St. Louis, lent his group’s bush hog to clear the remaining brush earlier this spring.

Davis plans to keep kids and volunteers busy in the garden throughout the summer.

“At this point with our learning loss with COVID, anything to keep them engaged in those hands-on activities helps,” Davis said.

Johnson, the fraternity chairman, didn’t know Davis before he got involved in the project, but said what she’s doing to give back to Washington Park is invaluable.

“The food they can provide and bringing kids into the agricultural part of it, learning those skills, you can’t beat that,” Johnson said. “She’s a person of service and has the gift of giving back.”

US blocks seafood from Chinese fleet for mistreating crew