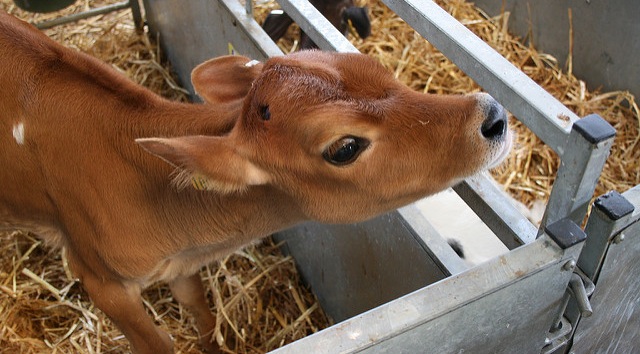 "We used a novel version of the CRISPR system called CRISPR/Cas9n to successfully insert a tuberculosis resistance gene, called NRAMP1, into the cow genome," stated Dr. Yong Zhang, lead author of the research. CRISPR technology has become widely used in the laboratory in recent years as it is an accurate and relatively easy way to modify the genetic code. (Stephen Fulljames, Flickr/Creative Commons)

The researchers, from the College of Veterinary Medicine, Northwest A&F University in Shaanxi, China, used a modified version of the CRISPR gene-editing technology to insert a new gene into the cow genome with no detected off target effects on the animals genetics (a common problem when creating transgenic animals using CRISPR).

Dr Yong Zhang, lead author of the research, said: “We used a novel version of the CRISPR system called CRISPR/Cas9n to successfully insert a tuberculosis resistance gene, called NRAMP1, into the cow genome. We were then able to successfully develop live cows carrying increased resistance to tuberculosis. Importantly, our method produced no off target effects on the cow genetics meaning that the CRISPR technology we employed may be better suited to producing transgenic livestock with purposefully manipulated genetics.”

CRISPR technology has become widely used in the laboratory in recent years as it is an accurate and relatively easy way to modify the genetic code. However, sometimes unintentional changes to the genetic code occur as an off target effect, so finding ways to reduce these is a priority for genomics research.

Dr Zhang explained: “When you want to insert a new gene into a mammalian genome, the difficulty can be finding the best place in the genome to insert the gene. You have to hunt through the genome, looking for a region that you think will have the least impact on other genes that are in close proximity. We employed a meticulous and methodological approach to identify the best suited region for gene insertion, which we show has no detectable off target effects on the bovine genome”.

The researchers inserted the NRAMP1 gene into the genome of bovine foetal fibroblasts — a cell derived from female dairy cows — using the CRISPR/Cas9n technology. These cells were then used as donor cells in a process called somatic cell nuclear transfer, where the nucleus of a donor cell carrying the new gene is inserted into an egg cell, known as an ovum, from a female cow. Ova were nurtured in the lab into embryos before being transferred into mother cows for a normal pregnancy cycle. The experiments were also conducted using the standard CRISPR/Cas9 technology as a comparison.

When the calves were exposed to M. bovis, the bacterium that causes bovine tuberculosis, the researchers found that transgenic animals showed an increased resistance to the bacteria measured by standard markers of infection in a blood sample. They also found that white blood cells taken from the calves were much more resistant to M. bovis exposure in laboratory tests.

Dr Zhang said: “Our study is the first demonstrating that the CRISP/Cas9n system can be used to create transgenic livestock with no detectable off target effects. Our work has led to the discovery of a useful position in the bovine genome that can be targeted with this gene editing technology to successfully insert new genes that benefit agricultural livestock.”