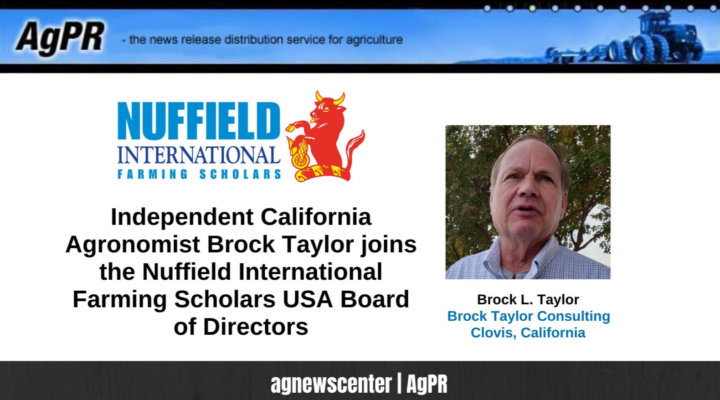 FRESNO, Calif. (AgPR) — Long-time independent agronomist Brock L. Taylor, of Clovis, has be named to the Nuffield International Farming Scholars – USA Board of Directors. Taylor is the owner of Brock Taylor Consulting, a well-respected crop consulting firm established in 1997. He received his B.S. Degree in Agronomy from Colorado State University in 1978 and a Master’s in Business Administration from Stanislaus State University in 1993.

Ed Kee, Chairman of the USA Board of Directors for Nuffield International says, “Brock Taylor has hosted Global Focus Programs for 19 years as they spend a week to learn and understand agriculture in California, the state with the largest and most diverse agriculture economy in the United States. His insights and contacts have been invaluable to the scholars over the years. We are pleased Brock has agreed to be a member of our Board.”

Nuffield Scholars spend a total of 16 weeks spread into three segments over 12 months visiting and learning about agriculture in countries around the world. The experience begins with the week-long Contemporary Scholars Conference, held in March in a different country each year. This event hosts all the year’s scholars and has become a major pillar in the Nuffield experience. The next step is the Global Focus Program, which provides scholars the opportunity to travel in small groups visiting different countries over a 7-week period. Finally, each scholar is responsible for a study topic report and travels to countries of their choosing in fulfillment of that obligation, submitting a major report at the conclusion of their year.

Taylor serves on the Fresno State University Plant Science Advisory Board and the West Hills Community College Precision Farming Advisory Board. He has served on the California Department of Food and Agriculture (CDFA) Fertilizer Research and Education Board as well as the CDFA Fertilizer Ag Advisory Board. He is a member of California Society of Agronomy and the American Society of Agronomy. He has partnered with Fresno State University and UC-Davis on several research projects on cotton as well as tests on reclaiming saline soils and with biostimulants. Taylor has presented at the National Cotton Conference, the West Coast Cotton Conference and the California Irrigation Association Annual Conference.

Nuffield USA has funded six scholars since its inception in 2017. U.S. Scholars have come from Delaware, Iowa, North Carolina, and Texas. Nuffield USA is currently working towards developing a scholarship for California farmers, ranchers or agricultural professionals.