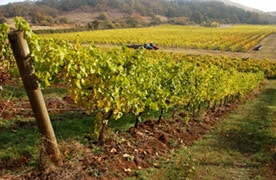 PORTLAND, Ore. — The Oregon Winegrowers Association (OWA) welcomes passage of a year-end omnibus funding bill and COVID-19 relief package that includes a number of wins for the Oregon wine industry in an otherwise challenging year.

After five years of effort, Congress voted to make permanent tax credits for craft beverage producers. This legislation was first introduced in 2015 by Oregon Senator Ron Wyden after working closely with the OWA to write a bill that would deliver tax savings for every Oregon winery. First approved by Congress in 2017 for two years and again in 2019 for one year, the bill was set to expire Dec. 31, creating uncertainty for wine businesses during a difficult 2020. WineAmerica, OWA and wine groups nationwide worked to ensure the tax credits were extended permanently.

“I’m gratified that Oregon’s winegrowers are among the major winners in the tax incentives I worked to make permanent,” said Senator Ron Wyden. “I’ve seen firsthand how tax incentives for our state’s world-class wine industry generate jobs and small business growth throughout Oregon. And extending these breaks is especially important now given how hard the pandemic and wildfires have hit these award-winning small businesses.”

The bill also includes $3.5 million for smoke impact research to help winegrowers and winemakers better manage and mitigate the impacts of smoke exposure on winegrapes. This builds on $2 million appropriated by Congress last year. The request for funding came as a joint effort of the OWA, and California and Washington winegrower groups. Senator Jeff Merkley (D-Oregon) played a pivotal role in securing the funding as Ranking Member of the Senate Agriculture Appropriations Committee.

“As the threat of wildfires increase, understanding how smoke compounds affect wine grape quality has become critically important to our wineries and growers,” said Alex Sokol Blosser, President of the Oregon Winegrowers Association. “We appreciate the support of Oregon’s Congressional Delegation in securing funding to study this issue impacting our viability and making tax credits permanent that provide businesses certainty during a chaotic time.”

ABOUT THE OREGON WINEGROWERS ASSOCIATION The Oregon Winegrowers Association advances and protects the investments of its members. Harnessing the power of state-wide consensus, the OWA stands as a vital advocate for the health, growth and economic sustainability of Oregon’s wine grape growing and wine production community. The OWA is the established and premier wine advocacy organization speaking on behalf of Oregon’s vineyards and wineries to decision-makers at the state and federal levels. More information is available at oregonwinegrowers.org.