Home / Illinois / Tariff revival and soybean exports
A new user experience is coming! We'll be asking you to login to your Morning Ag Clips account March 1st to access these new features.
We can't wait to share them with you! Read more here. 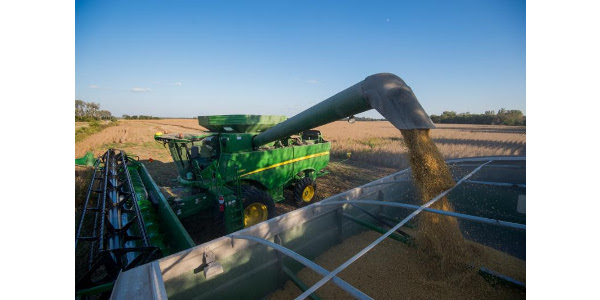 If the U.S. and China rekindle the trade war, lower export totals, growth in ending stocks, and limits on soybean price potential face producers, according to University of Illinois agricultural economist Todd Hubbs. (Courtesy of SDSA)

URBANA, Ill. – Recent soybean price weakness reflects new tariff threats against China that emerged as an option for retaliation against Chinese behavior regarding the coronavirus. A collapse of the Phase One trade deal looks politically feasible this year. If the U.S. and China rekindle the trade war, lower export totals, growth in ending stocks, and limits on soybean price potential face producers, according to University of Illinois agricultural economist Todd Hubbs.

“A growing blowback against China for behavior associated with the pandemic does not bode well for the promising trade deal signed in January,” Hubbs says. “Since the signing of the agreement, Chinese buying of soybeans disappointed many observers. The coronavirus outbreak and sourcing out of Brazil kept Chinese buying below expected levels.”

Soybean purchases by China picked up over the last two weeks for both the current and next marketing years. Sales of almost 32 million bushels of soybeans gave the market support and some indication of purchases to come, Hubbs notes.

“Soybeans promise to be a large portion of buying by China in meeting their obligations, but a significant escalation in trade tensions places those purchases in doubt,” he says. “Increased Chinese buying appears necessary to hit the export forecast set forth by the USDA in the most recent WASDE report.”

“Soybean exports need to equal close to 500 million bushels from May through August to reach the current projection. With a little over 17 weeks remaining in the marketing year, 27 million bushels per week are necessary to meet the USDA projection,” Hubbs states.

“Reports of more instances of African swine fever in China indicate that the disease is far from under control, but soybean demand should continue to be strong,” Hubbs says. “Given the abundant Brazilian crop, a repeat of last year’s export performance over the remainder of the marketing year seems unlikely without substantial buying from China.”

Brazil’s soybean crop looks set to come in near 4.55 billion bushels. The record level of production occurred despite the size of the crop being revised down by 55 million bushels in the last WASDE report. Hubbs notes a weak currency continues to benefit Brazilian exports.

“The Brazilian real depreciated by almost 37% since the turn of the year. Domestic political turmoil promises sustained currency weakness in Brazil over the near term,” Hubbs states. “Brazil exported approximately 425 million bushels in March and is set to expand on that total in April with potential exports coming in near 530 million bushels. A setback in trade relations between the U.S. and China may add more bushels to an already impressive total of Brazilian exports.”

China’s behavior with regards to the coronavirus outbreak continues to generate a reaction against the country both domestically and around the world. This backlash created calls for retribution that appear like a political winner in the U.S., Hubbs notes.

At present, this marketing year is on a similar export pace to last year, Hubbs notes. Unlike 2019, the potential for removing a substantial amount of soybean harvested acres seems remote this year.

“The March Prospective Planting report pegged soybean acres at 83.5 million. If this holds, harvested acres look to expand over 7.5 million acres from 2019 levels. Weakness in corn prices may see even more soybean acres this year,” Hubbs says. “In February, the USDA pegged 2020-21 exports at 2.05 billion bushels based on increased buying out of China. If the past is any indication of future possibilities, a resumption of the trade war makes that forecast a remote proposition.”

A resumption of hostilities on the trade front could see an expansion of ending stocks this marketing year due to lower export levels, Hubbs concludes.

“While soybean crush levels remain robust, weak exports for the remainder of the current marketing year could push ending stocks closer to 500 million bushels,” he says. “The implications for the 2020-21 marketing year are similar. This scenario limits the upside potential for soybean prices associated with the expanded export commitments promised under the Phase One trade deal.”