Home » Tar spot of corn found for the first time in Minn. 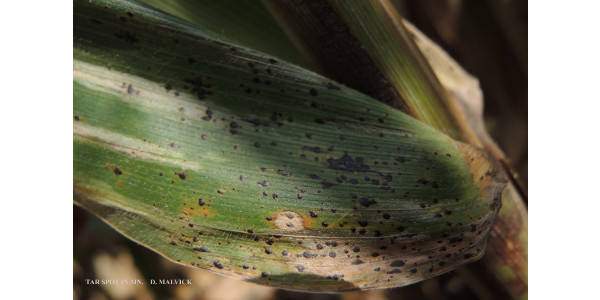 Tar spot of corn was found for the first time in Minnesota in late September. (Courtesy of University of Minnesota)

MINNEAPOLIS — Tar spot of corn was found for the first time in Minnesota in late September. Based on reports from Iowa and Wisconsin, we suspected the disease could move into Minnesota. Now tar spot has been found in one field in southeastern Minnesota (southern Fillmore County) where the wet summer weather has likely favored infection and spread. This is a good time to scout for tar spot in fields that still have green leaves to get a better idea of how far this disease has spread into Minnesota.

Although tar spot is known to occur in only one location In Minnesota, it could easily have escaped detection in other fields. In the field where the disease was found, tar spot appeared to be focused in one area that was not visible from nearest road. Walking within the field was required to see it. The level of infection was moderate to high on some plants. There will likely be minimal or no effect on yield because the disease appears to be limited to a small part of the field and infection likely started late in the summer. The risk of this disease is increased in the future in infected areas.

Tar spot is caused by the fungus Phyllachora maydis. The fungus infects leaves (and sometimes husks) and produces raised, small (0.1” – 0.3”) raised black structures on the leaf surface. See photos below. The black structures are firm, appear fairly smooth on the surface, and do not rub off or break open as do rust pustules. Tar spot can also produce fisheye symptoms, which are tan lesions with dark borders surrounding the tar spots.

Tar spot can result in significant yield losses, depending on weather, severity, and timing of disease development. As noted, tar spot will not likely cause yield reductions in the field where it was found in Minnesota, but this find indicates that tar spot continues to spread in the Midwest. Time will tell us how much tar spot can spread and damage corn in Minnesota.

Reported distribution of tar spot in the U.S.: https://corn.ipmpipe.org/tarspot/

Yield loss estimates from tar spot in other states in 2018: https://cropprotectionnetwork.org/resources/features/how-tar-spot-of-corn-impacted-hybrid-yields-during-the-2018-midwest-epidemic