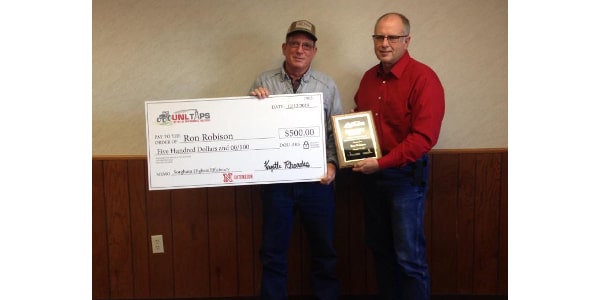 Ron Robison tied with Baker for the Highest Input Use Efficiency Award in the Sprinkler Sorghum Competition receiving a plaque and $500 monetary award. (Courtesy of UNL)

LINCOLN — It wasn’t the presentation or even the awards during the Testing Ag Performance Solutions (TAPS) awards banquet last week that had the TAPS Leadership Team most excited. Instead, it was the peer-to-peer exchange and comradery before, during, and after the banquet between competitors, industry leaders and observers that had facilitators abuzz.

The TAPS program was created by University of Nebraska educators and specialists three years ago as an innovative way of connecting producers to industry professionals and offering a way of testing out new advancing technologies. The program has grown from one sprinkler-irrigated corn competition in North Platte the first year to now involving five competitions in two states with four crops.

“Farmers talking to other farmers about how they managed their operations has helped many adopt new practices and technologies that will make their operations more profitable and efficient,” said Chuck Burr, Nebraska extension educator and TAPS leadership team member. “Farmers trust other farmers and this will help us move the needle on production practices that will make our farms more sustainable into the future,” he added.

“It has been exciting to see the growth of the program, especially the connections made among growers” said Daran Rudnick, irrigation specialist and TAPS leadership team member.

It has also been interesting to see the level of engagement with ag industry and the participants. TAPS allows participants to use various forms of technology such as soil moisture sensors, aerial and satellite imagery, and weather data at no cost. Burr suggests that this “allows them to see which technology will add value to their farming operations with no risk of affecting the actual yield.”

The evening’s presentation began with a short speech about the future of agriculture given by KRVN Farm Broadcaster Clay Patton from Lexington. Patton understands along with many others in attendance that “unfortunately, the future of ag is not getting any easier.” The advancement in technology is making the ability to feed the world an easier task though. “Technology is part of the answer,” Patton said.

The TAPS leadership team followed Patton, handing out the first ever “Outstanding TAPS Advocate Award.” This award was created to honor a person or group that has advocated for the TAPS program either behind the scenes or by speaking about it at public events. This year the award was presented to the Nebraska Water Balance Alliance (NEWBA) for their help in developing the TAPS program. Roric Paulman, NEWBA president, was one of the members accepting the award. He said this program was “built on a Sunday evening conversation” but has become so much more and “isn’t simply a competition.” He said it is the peer-to-peer exchanges and the interaction between all people involved that makes the TAPS program unique and successful.

The irrigated sorghum competition had 10 teams, of which only four were profitable due to the lack of a marketing plan for some participants. Each team chose a different hybrid so the yield competition was an interesting one, with Mike Baker from Trenton taking home the Highest Yield Award using Dekalb 45-23 as his hybrid of choice. The Greatest Input Use Efficiency Award was a close contest and actually ended in a tie. Baker and Ron Robison of Alma shared the award money and title for the award that takes into consideration their irrigation and nitrogen decisions. The highest award of the sorghum contest, the Most Profitable Award, was won by Baker with a lead of over $35 per acre.

In the first year of this corn competition 16 teams competed, but one team stood out above the rest. The Big Cob Bin Busters team which included Joshua Becker, Ben Benson, Jason Ladman and Jonathan Remple took home all three awards for the inaugural SDI competition. The group of Seward and Beaver City seed salesmen and producers made some interesting management choices that helped them win the trio of awards, including the decision to not take out any crop insurance. They selected the Big Cob 15-H64 hybrid, which was one of 11 hybrids used in the SDI competition. They applied 140 pounds of nitrogen per acre throughout the season and used 3.95 inches of irrigation water on their plots. Their total costs were close to the competition average, but their decision to market part of their grain during the higher corn market put them above their competition for the Most Profitable Award.

And in the competition that started it all, the sprinkler corn competition, 24 teams participated in the third year with many returning competitors seeking the coveted Most Profitable Award. Before awarding that title, the Highest Yield Award was presented to the Fontanelle Hybrids ® Team that included Bob Wiseman of Hershey, Jay Elfeldt of Sutherland, Chris Anderson of Hastings, and Travis Edeal of Lexington. The team chose to use Fontanelle 12D558 which was among 15 hybrids used in the competition. The team also took home the award for Highest Input Use Efficiency using 160 pounds of nitrogen per acre and just 2.55 inches of irrigation water throughout the season. The highest yield award and the highest efficiency award was won by the same team, showing you don’t have to give up yield to be efficient. The Perkins Group, competing for the third year and placing as a close second last year, finally edged out the competition by over $30 per acre and won the award for Most Profitable Farm. The team of producers from the Grant area included Bruce Young, Jim Kemling, Ron Hagan, Shawn Turner, Troy Kemling, Rick Salsman, Curt Richmond, Bill Richmond, Brent Gloy, and Ted Tietjen.

After all the awards were presented, the evening concluded with the grand prize drawing and door prize giveaways as well as the announcement of the winner of the Calcutta auction that was held via silent auction for the sprinkler corn competitors. Baker took home the contestant grand prize that included a Yeti Cooler, a one-year subscription for a CropMetrics probe, as well as other prizes from TAPS sponsors. Todd Downer won the one-year subscription for an AquaSpy probe and numerous other attendees won door prizes donated by TAPS supporters.

The Calcutta auction brought in $830 with Mike Jacobson of North Platte having the top bid on the Perkins County team that took home the Most Profitable Sprinkler Corn Farm, so he was awarded a check for 50% of the proceeds or $415.

The TAPS team gave some insight on the upcoming 2020 competitions which they are looking forward to and already starting to plan.

The TAPS program would like to thank all of the sponsors, supporters, and the competitors for being a part of and making the program a continued success.

Are you a great person to work for?