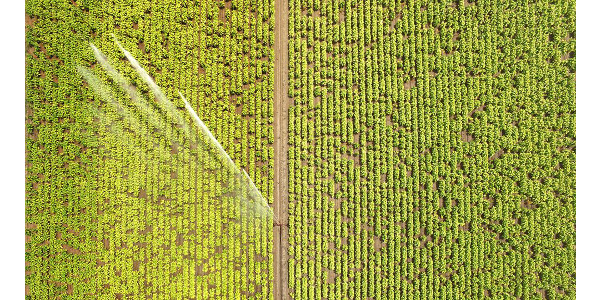 One day soon, tiny electronic sensors will take precision farming to the next level. (Courtesy of NC State University)

RALEIGH — One day soon, tiny electronic sensors will take precision farming to the next level. They will translate the language of plants and send waves of data to growers, giving a heads-up at their crops’ first talk of trouble.

Our cross-college partnership is leading the way.

Plants have a lot to say, if you know their language and listen. At NC State, scientists and engineers are collaborating across colleges to learn that language and devise electronic devices sensitive enough to detect pests, pathogens and other stressors before the plants show visible signs of trouble.

Principal investigator and CALS professor Ralph Dean says the project’s goal is to show that it’s possible to develop an early-warning system using electronic sensors that reliably and accurately translate a plant’s messages in real time — fast enough, he hopes, for farmers to intervene to prevent crop loss.

“To me, this is science at its best, bringing together people who may not speak the same language but who can share insights and understand ones offered from other perspectives,” Kathariou said.

Of course, plants can’t talk out loud, but their cells do have ways to communicate with each other and with other nearby plants. One way is by emitting aromatic chemicals known as volatile organic compounds, or VOCs, explains Dean, a William Neal Reynolds professor of plant pathology.

If you’ve ever smelled freshly mowed grass, then you’ve encountered the VOCs it emits when it’s been wounded. Those VOCs are noticeably different than compounds emitted when, say, a greenhouse plant has been infected by powdery mildew or attacked by disease-carrying thrips.

“Plants produce specific volatile signatures in response to different types of attacks, whether they be from biotic agents such as pathogens or from abiotic stresses such as drought and mechanical damage. So we can use these signatures to diagnose what’s causing that stress,” Dean says.

Oftentimes the VOCs’ aroma is subtler than that of cut grass — too subtle for people to smell. Fortunately, though, scientists know how to get around that limitation: Using gas chromatography and mass spectrometry, they’ve been detecting plant VOCs and determining what’s in the chemical cocktails that make them up.

While that technology is fine for scientists working in a lab, it’s not yet practical for farmers to use in the field. That’s because it relies on equipment that’s too big, bulky and expensive.

What farmers need, Dean says, are sensors that are affordable, quick, reliable and small: Think of lollipop-shaped sensors placed next to each plant in a farmer’s field. Coin-sized metallic chips embedded in plants. Or maybe sensors incorporated into drones or irrigation equipment that continuously pass over the field, relaying data to farmers about real-time conditions.

Sound far-fetched? Not to the researchers running the project.

Here’s how it works…

Earlier this year, Dean pitched his ideas at a meeting designed to kickstart collaboration among researchers from CALS and the College of Engineering.

Each attendee could present a single slide conveying their ideas for research to propel the NC PSI toward its science goals. The initiative, which will be headquartered in a state-of-the-art building planned for NC State’s Centennial Campus, aims to make the state the world’s best place for plant sciences innovation.

Dean’s ideas for VOC-detecting sensors resonated with others at the meeting. Some professors  had expertise and experience that they could contribute immediately.

Meanwhile, chemical engineer Greg Parsons offered to use his knowledge of advanced materials to find polymers capable of responding to low levels of key chemicals in VOCs. Food microbiologist Kathariou rounded out the team with her knowledge of the molecular-level relationships between plants and troublesome human pathogens — such as listeria, E. coliand salmonella — that can live on produce and result in foodborne disease outbreaks.

Thanks to a grant from the North Carolina Agricultural Foundation, plus matching funds from departments, in July they started a pilot project to demonstrate that a small array of sensors — perhaps eight to 10 — could rapidly detect chemical signatures of stressors affecting wheat and tomatoes. They are looking not only at pathogens that can kill plants but also ones that sicken people who’ve eaten contaminated produce.

The researchers have hired a post-doctoral researcher, Nasie Constantino, with experience in plant VOCs. They also are reaching out to the ag biotech industry to seek further ideas and expertise. A planned symposium next year will bring together scientists from around the world to discuss the potential for using electronics to promote better yields and safer food.

Steve Lommel, CALS’ associate dean for research, is excited about the project’s potential to advance precision farming to deliver on its full promise: higher yields, with less need for chemicals like pesticides that can affect the health of both people and the environment.

“One day in the not-so-distant future,” Lommel says, “every plant in every field in every county in every state in this country will be sending waves of big data to our growers, letting them know with intricate precision the best way to farm.” 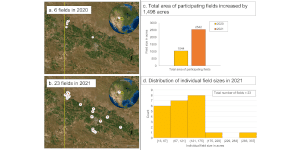 SCOTTSBLUFF, Neb. — Nowadays, farmers have more access than ever to data of all kinds about their crops, thanks to rapid development of sensor and telemetry technologies over the past few decades. Yet the adoption rate of sensors for farming operations is still low, possibly due to cost, comfortability of adapting to sensor-based management, concerns […] 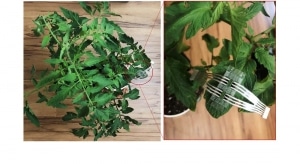 RALEIGH, N.C. — Researchers from North Carolina State University have developed a patch that plants can “wear” to monitor continuously for plant diseases or other stresses, such as crop damage or extreme heat. “We’ve created a wearable sensor that monitors plant stress and disease in a noninvasive way by measuring the volatile organic compounds (VOCs) […]

Simon Gregg has a passion for stormwater