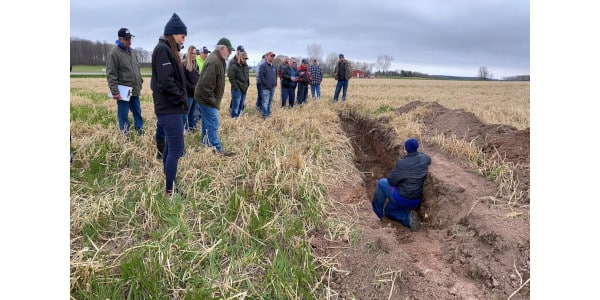 BRUSSELS, Wis. — Mike Vandenhouten was blunt in telling farmers at a Peninsula Pride Farms field event it was time to make a change and improve the area’s soil health.

“There comes a time when you have to take a chance and quit doing things the way we have traditionally been doing it. I think there is a better way to do it and this is an excellent opportunity for me to give it a try. I have some reservations, but we will see what happens,” Vandenhouten said about planting oats as a cover crop last fall and no-till planting this spring.

The Conservation Conversation, held on April 28, had nearly two dozen farmers looking at the soil biomass deep in a soil pit with Jamie Patton, senior outreach specialist in the Nutrient and Pest Management Program at the University of Wisconsin-Madison. She showed farmers what is happening below the surface and why cover crops are needed for living roots year-round.

“There was a 100 pounds of oats planted last fall and there is a tremendous amount of biomass in this field,” Patton said. “We don’t need to till this in. Many farmers get anxious about seeing this much residue out here and as long as our equipment is setup for this, it is going to be no problem to no-till plant.”

As Patton dug into the soil, she showed the immense cover crop root structure and numerous earthworms. The soil was a dark, rich black color and crumbled as Patton broke it apart. She also showed a clear soil demarcation where at one time it was conventionally tilled compared to today’s practices.

“I can’t give all the credit to cover crops, but it does have me intrigued as to how much of a difference the cover crop did have,” he said. “I am going to continue cover crops and see if I have good results like that again.”

Nathen Nysse, an independent crop adviser for Tilth Agronomy, asked Vandenhouten what his communication has been with those who have no-till planters and experience with oats as a cover crop.

“That’s the greatest thing about being a member of Peninsula Pride Farms, there is such a network of people,” Vandenhouten said. “There are farmers who have tried different practices like this that have had succeeded. By talking to them it gives me a great deal of comfort that I can do this too and hopefully have the same success they have.”