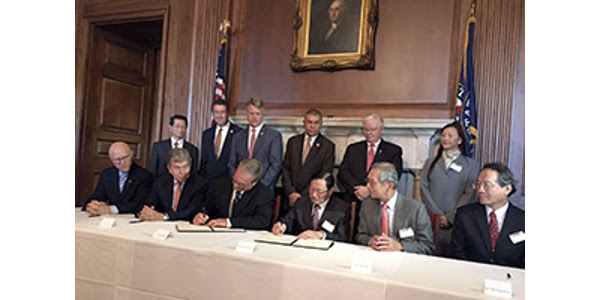 WASHINGTON — Members of the 2017 Taiwan Agricultural Goodwill Mission pledged Wednesday to purchase 197 million bushels of U.S. corn and 500,000 tons of U.S. distiller’s dried grains with solubles between 2018 and 2019. The commitment was made during a signing ceremony at the U.S. Capitol in Washington.

The members of the Goodwill Mission also signed letters of intent to purchase soybeans and wheat. The biennial team is part of a long-term effort to strengthen economic ties between Taiwan and the United States.

“The U.S. Grains Council has worked in Taiwan for more than four decades and has watched Taiwan grow into one of our largest customers,” said Deb Keller, USGC chairman and a corn farmer from Iowa. “The Goodwill Mission helps us maintain a healthy trading relationship with Taiwanese buyers and end-users by providing continued confidence in the U.S market.”

Prior to the official ceremonies, the corn representatives of the Goodwill Mission visited the farm of Chip Councell, USGC past chairman, on the Eastern Shore of Maryland. Councell participated in the Wednesday signing ceremony on behalf of the Council and U.S. corn producers, with Keller in Southeast Asia for a Council-sponsored regional trade summit.

The Taiwanese delegation was also honored this week in Washington at a reception with government officials and representatives of the agriculture industry, sponsored jointly by the Council, U.S. Wheat Associates, the U.S. Soybean Export Council, the North American Export Grain Association and the National Grain and Feed Association.

Following the events in D.C., corn members of the Goodwill Mission will travel to Iowa, Indiana and Missouri to sign letters of intent with those states’ governors, tour farms and elevators and meet with local producers, agriculture groups and policymakers.

The Goodwill Mission has been organized by Taiwan’s Ministry of Foreign Affairs every other year since 1998 and allows Taiwanese participants to gain familiarity with U.S. coarse grains’ yield, production and quality. The Goodwill Mission also provides education on the advantages of U.S. coarse grains and co-products as well as reconfirms the commitment by the United States to serve as a long-term, reliable supplier for Taiwan.