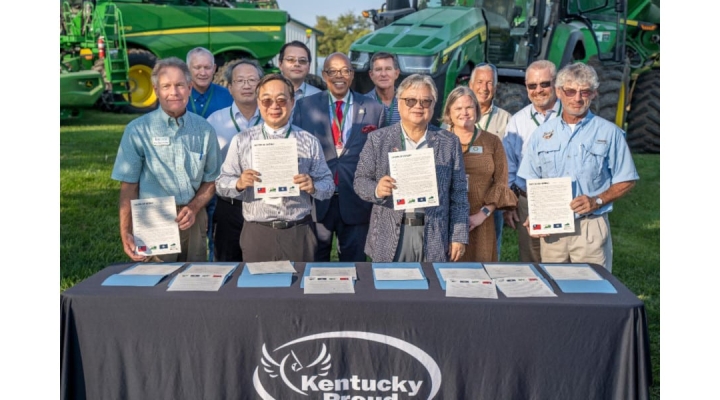 Members of Kentucky corn and soybean associations and the Kentucky Department of Agriculture joined representatives from the Republic of China (Taiwan) at an event Sept. 16 to sign Letters of Intent for Taiwan to purchase corn and soybean products from United States farmers over the next two years. (Courtesy Photo)

FRANKFORT, Ky. — Members of Kentucky corn and soybean associations joined representatives from the Republic of China (Taiwan) at an event Sept. 16 to sign Letters of Intent for Taiwan to purchase corn and soybean products from United States farmers over the next two years, Kentucky Commissioner of Agriculture Dr. Ryan Quarles has announced.

“These agreements could allow Kentucky farmers to continue to benefit from one of the United States’ great trade partners,” Commissioner Quarles said. “Agricultural exports are a mutually beneficial agreement for our farmers and those who receive the quality products we produce.”

The Taiwan delegation traveled to central Kentucky Sept. 16-18, visiting four farms, an agribusiness, a distillery, and the Kentucky Bourbon Festival. During their visit, representatives from Kentucky and Taiwan, in both the corn and soybean industries, joined together to officially sign agreements for future purchases of U.S. farm products. While in the United States, the delegation also made visits to Washington, D.C., Illinois, Iowa, and Minnesota.

“Since 1998, 13 Taiwan Agricultural Trade Goodwill Missions have been sent to the U.S. Most of these missions have visited midwestern states,” said Elliot Wang, Director-General of Taipei Economic and Cultural Office in Atlanta. “Under the strong recommendation by Taipei Economic and Cultural Office in Atlanta, the Mission came to Kentucky, the only southeastern state visited during their trip across the U.S. this year. Last time the Mission visited Kentucky was in 2015.”

During this year’s visit, the Taiwan Feed Industry Association agreed to purchase 59 million bushels of corn from U.S. producers at a cost between $1.9 billion and $2.1 billion. The Taiwan Vegetable Oil Manufacturers Association will purchase between 96 million and 107 million bushels of soybeans, valued between $1.9 billion and $2.1 billion. These combined purchases over the next two years will be beneficial to corn and soybean growers in Kentucky and across the U.S.

Due to its high quality produce, the U.S. remains one of Taiwan’s largest sources of agricultural products, supplying more than one-fifth of the country’s major agricultural imports.

Last year, U.S. farm exports finished at record levels that approached $175 billion. Kentucky’s economy also benefits from exporting agricultural products. Those exported products totaled $2.5 billion in 2021, according to the USDA. Their most recent statistics showed Kentucky export values of soybeans at $582.3 million and corn at $165.8 million.

“Kentucky’s corn growers are appreciative of Taiwan’s commitment to purchasing U.S.-grown corn over the next two years,” said Ray Allan Mackey, Kentucky Corn Promotion Council chairman and farmer from Hardin County. “Promoting corn exports and improving relationships with our customers is paramount to our growers’ successes. Taiwan has been a significant buyer of U.S. corn, purchasing more than $428 million worth in the 2020-2021 marketing year. The fact that they are securing U.S.-grown corn in 2023 and 2024 speaks loudly of our growers’ dedication to quality and ability to meet demand.”

“The Kentucky Soybean Promotion Board is proud of the exceptional quality of the soybeans that we grow here in our state. While we believe that all U.S. soybeans are of high quality, the high protein content of Kentucky-grown soy is even more beneficial for poultry and livestock feed,” Kentucky Soybean Promotion Board Chairman Larry Thomas said. “With our high-quality oil for human use and high-quality, high-protein meal for poultry and livestock feed, it makes sense that these buyers have a preference for not only U.S. soy, but for Kentucky soy. We appreciate this group of buyers and dignitaries coming to visit some of our farms, see for themselves the growing conditions, and meet some of the farm families who raise Kentucky soybeans. Kentucky’s soybean farmers look forward to long-term and mutually beneficial relationships with our trade partners for many years to come.”