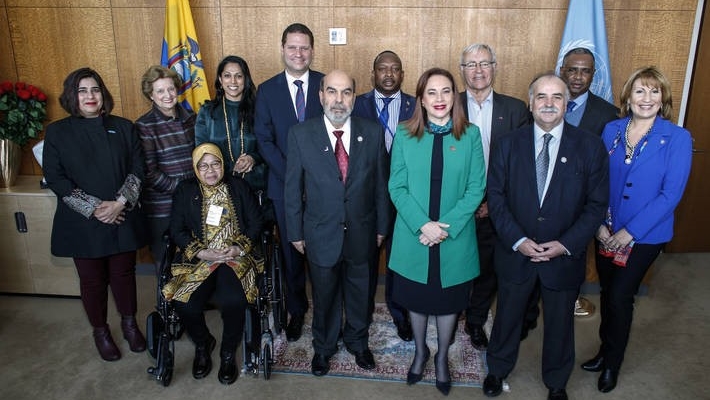 “To implement the 2030 Agenda for Sustainable Development, the political commitment of global leaders is not enough. We also need the full engagement of local authorities,” he said. “After all, it is at the local level where people live, where people eat, use water or dispose their garbage.”

Graziano da Silva made the call at a high-level meeting co-chaired by the President of the 73rd Session of the UN General Assembly, María Fernanda Espinosa Garcés, and the United Nations Human Settlements Programme (UN-HABITAT), which gathered mayors from Valencia (Spain), Quito (Ecuador), and Surabaya (Indonesia), and food policy representatives from New York, Praia and  United Cities and Local Governments.

At a time of rapid urbanization, cities are becoming increasingly important agents of change including on policies and action aimed at providing access to healthy diets for all, the FAO Director-General said.

Today, about 55 percent of the world’s population lives in urban areas, a proportion that is expected to increase to 68 percent by 2050 – especially in Africa and Southeast Asia, where hunger and poverty are currently mostly concentrated.  Meanwhile some 80 percent of all food produced is consumed in urban areas.

Achieving Sustainable Development Goal number 11, which aims at promoting sustainable cities and communities, is “fundamental” for achieving all the other SDGs, Graziano da Silva said.
While the number of hungry people in the world has increased over the last three years, so has the number of people suffering from obesity “especially in urban areas, where people are more likely to eat cheaper processed food high in trans-fats, sugar and salt,” he said.

“We urgently need to transform and put in place food systems that offer healthy and nutritious food for everyone, while preserving our natural resources and biodiversity,” Graziano da Silva stressed. For that, he said, we have to integrate actions from the production to the consumption of food.

He noted that we can no longer think of rural and urban areas as a dichotomy, as dissociated things. City dwellers cannot be considered as mere food consumers, and rural communities must not be seen exclusively as food producers. It is important to provide family farmers with better access to services, infrastructure and markets, to create the conditions for urban people to eat more fresh and nutritious food based on short food supply chains, and also on urban and peri-urban agriculture, and to reduce the amount of food that is either lost or wasted.

The FAO Director-General praised the “Global Health and Foreign Policy” recently adopted by the General Assembly, which addresses the key theme of nutrition fostering the promotion of healthy diets and lifestyles with specific policies linked to the national commitments in the framework of the UN Decade on Nutrition.

“As the obesity and overweight epidemic is out of control and their effects cost to national health systems yearly more than the military expenditure worldwide, the international community needs to go further,” he said. “Public policies that promote healthy diets are urgently needed to address people’s food choices.”

Graziano da Silva explained that the adoption of fiscal and regulatory policies, including taxation of unhealthy foods and beverages, front of pack labeling, restriction of marketing and commercialization of unhealthy foods to children and adolescents are already in place in several countries, and these can serve as a reference for others.

“Overweight and obesity are a public, not a private issue: governments should implement policies and programs aimed at providing healthy, nutritious and affordable food for everyone. Families and individuals can no longer be the only responsible for what and how they eat”.

Addressing the meeting, the President of the UN General Assembly Maria Fernanda Espinosa said: “Local governments have a decisive role in helping to ensure that the 2030 Agenda for Sustainable Development becomes a reality. Inclusive, resilient and sustainable cities are sources of opportunity and development. Let us work together so that the great urban centers around the world provide a better quality of life for all of their inhabitants.”

“One of the characteristics of the 21st Century is that cities are increasingly providing autonomous solutions to development challenges. Humanity’s problems are too important to leave only in the hands of states,” said Joan Ribó, Mayor of Valencia, Spain, where FAO is providing support for the establishment of the World Sustainable Food Centre, aimed at promoting healthy and sustainable food systems among cities.

“Whether we help develop National Urban Policies, support integrated urban and territorial planning, work towards building climate resilience of the urban poor, or support resource-efficient urbanisation, feeding cities in the face of climate change is integral to our efforts to create more resilient, inclusive and sustainable communities across the urban-rural continuum,” UN-HABITAT Executive-Director Maimunah Mohd Sharif said in a video message.

“Instruments such as the SDGs and the New Urban Agenda engage all levels of government. At the city level, we are happy to tackle new and outstanding challenges but require assistance in obtaining the right tools and resources,” said Mauricio Rodas, Mayor of Quito, Ecuador.

FAO has been highly engaged in promoting the sustainable development of cities based on a food systems and territorial approach.

It supports the implementation of the “Milan Urban Food Policy Pact”, the first international protocol calling for cities to develop sustainable food systems that grant healthy and accessible food to all, protect biodiversity and reduce food waste.

FAO also actively participated in the Habitat III process that resulted in the adoption of the “New Urban Agenda” at the Quito Conference in 2016. “FAO’s Framework for the Urban Food Agenda” presents ideas on implementing actions to generate employment, strengthening local food value chains; and reducing and managing the high levels of food waste found in many cities.