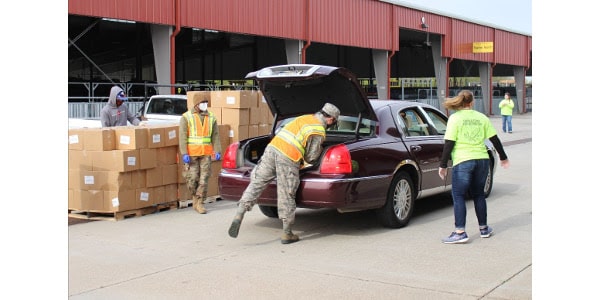 KEARNEY, Neb. — Nebraska food banks will soon be able to provide more beef to families in need thanks to the “Good Life. Great Steaks.” T-shirt campaign coordinated by the Nebraska Beef Council and the Rural Radio Network. During the four-week promotion, over 1,200 shirts imprinted with the campaign slogan were purchased raising $8,100 to supply beef that will be distributed through Food Bank for the Heartland and Food Bank of Lincoln.

The campaign was designed to highlight the importance of Nebraska’s beef industry to the global marketplace while supporting efforts to address food insecurity in the state. Nebraska’s eight billion pounds of beef produced in 2019 accounted for nearly one third of the total US beef production. Nebraska is home to 6.8 million head of cattle, more than 3 times the number of people.

According to Feeding America, the estimated number of food insecure Nebraskans jumped from 237,000 to 334,000 due to COVID-19.

“COVID-19 forced thousands of Nebraska families into a situation they never imagined, seeking food assistance for the very first time,” said Brian Barks, President & CEO of Food Bank for the Heartland. “Nebraska’s two food banks, Food Bank for the Heartland and the Food Bank of Lincoln, have seen an estimated 40 percent increase in demand for food assistance. The dollars raised through the Nebraska Beef Council’s campaign will greatly assist us in providing nutritious food to struggling families. We are grateful for the support of the Beef Council and the Rural Radio Network.”

Along with the proceeds from the t-shirt sales, Tyson Foods and JBS USA have pledged to add to the donations to the food banks. As a result, thousands of beef meals will be served to families in need across the state.

“It’s been great to see the outpouring of support during this campaign,” said Buck Wehrbein, board chairman for the Nebraska Beef Council. “Nebraskan’s love their beef and they are generous when it comes to helping their neighbors. What a great way to show our pride for the state’s beef industry while helping to put food on the tables of those in need. Nebraska really is home to the good life, great steaks and amazing people.”

Oat and brassica quality in fall and winter
September 23, 2020