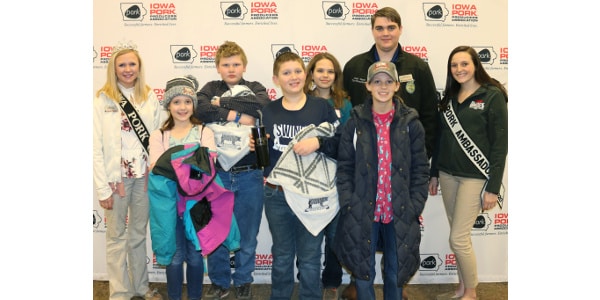 “This event was created to keep youth who are interested in the swine industry engaged, learning more, and building their skills. We also were able to highlight all the various careers available within our industry,” said Kelsey Sutter, IPPA’s marketing and programs director.

Nearly 60 students from Iowa and Minnesota attended. Activities were developed for three age groups: Junior (ages 8 to 10 years); Intermediate (ages 11 to 14); and Senior (ages 15 to 18).

Students competed in several areas to earn points toward their efforts to win the Sweepstakes prizes in their division. Points were earned for photo and essay entries, swine judging, a skill-a-thon, a written test, and by taking part in a workshop provided by a group of ISU students studying animal science.

During the workshop, students compared nutrition labels for ground pork, ground beef, as well as two plant-based proteins. They also did a blind taste test of ground pork and a meatless alternative.

Financial assistance for farmers and ranchers
May 26, 2020