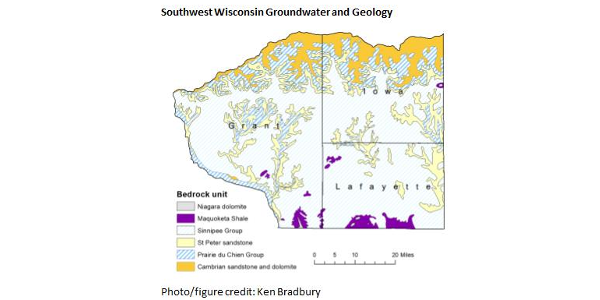 MADISON — The Southwest Wisconsin Groundwater and Geology Study (SWIGG) of Grant, Iowa, and Lafayette Counties completed its first objective this spring: to assess the extent of well contamination in the three counties. The second and final round of broad groundwater sampling was collected April 12-13, 2019. Samples were collected from 539 randomly-selected private wells, a different group than the first round of sampling that occurred in November 2018.

“Finding fewer coliform detections in wells tested in the early spring is consistent with what other statewide surveys have reported,” said State Geologist Ken Bradbury, Director of the Wisconsin Geological and Natural History Survey. “This may be because bacteria die off during winter and in the winter months there are fewer contamination sources on the land surface.”

This study has provided the most robust assessment of groundwater quality in the three-county region to date. “We now have a solid assessment of private well contamination in southwest Wisconsin based on a large, representative sample of wells,” said microbiologist Mark Borchardt, a researcher with the USDA Agricultural Research Service.

Wells were selected randomly to minimize bias, and a large proportion of the private wells in the three counties were tested (8 percent of wells). The “snapshot” approach of collecting all samples at nearly the same time gives researchers greater capability to identify factors related to well contamination.

“We can no longer say we don’t know the extent of the problem,” said Lynda Schweikert, Administrator of the Grant County Conservation, Sanitation, and Zoning Department. “Now we are asking, what are the causes of contamination?”

The next steps in the project will include additional biological testing of selected wells to distinguish human versus livestock microorganisms in well water. The research team will also carry out geologic studies and analyze well construction practices in the three-county region, with the goal of determining correlations between water quality, geology, and well construction.

It is recommended that all private well owners test their wells annually. Residents can contact their local county health departments in Iowa, Grant, or Lafayette counties for information on testing, costs, and certified laboratories. The Wisconsin DNR also provides information and advice for well owners online at https://dnr.wi.gov/topic/Wells/homeowners.html.

The study was initiated by Grant, Iowa, and Lafayette Counties in collaboration with researchers from the U.S. Department of Agriculture, the Wisconsin Geological and Natural History Survey-University of Wisconsin-Madison Division of Extension, and the U.S. Geological Survey. Support for the study comes from the counties and agencies involved as well as other organizations, including the Lafayette Agricultural Stewardship Alliance and the Iowa County Uplands Farmer-led Watershed Group.

"Transforming Education for the Workforce"
February 20, 2020