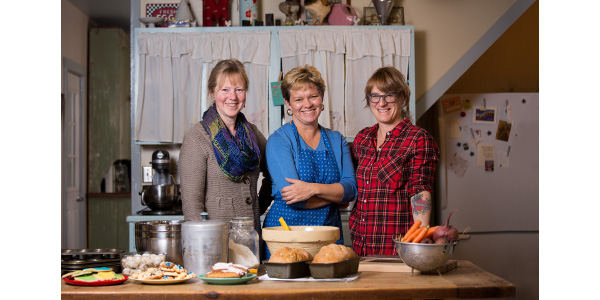 CHIPPEWA FALLS, Wis. — After years of waiting, the people of Wisconsin can finally buy homemade cookies, cakes, muffins and breads directly from home bakers. October 5, a Lafayette Circuit Court judge clarified his May 31 ruling that the state’s ban on selling home-baked goods is unconstitutional. Wisconsin officials had argued that the ruling was limited to Lisa Kivirist, Kriss Marion and Dela Ends—the three bakers, and Wisconsin Farmers Union members, who teamed up with the Institute for Justice in January 2016 to challenge the ban in state court. But this week, Judge Duane Jorgenson disagreed, clarifying that his ruling applies not only to the three plaintiffs, but to all home bakers like them.

As a result, home bakers across the Badger State are now free to sell safe, delicious baked goods that do not require refrigeration directly to consumers.

“This is a win for all of us home bakers,” said home baker Hannah Shaw, who stopped selling her cakes and cupcakes earlier this year after the government issued a cease and desist order against her. “I can’t wait to start baking again!” Law enforcement threatened Shaw with a $10,000 fine and a year in jail, merely for selling the delicious goods out of her home.

The new ruling came about after the plaintiffs informed the court that the Wisconsin attorney general’s office was still enforcing the unconstitutional ban on selling home-baked goods against everyone except the three of them.

In his initial May decision, Judge Jorgenson found that the ban had “no real or substantial connection” to protecting the public, because there was no instance of anyone ever becoming sick from an improperly baked good despite home-baked goods being legally sold in 48 states. In addition, the judge found that the ban only benefited special interest groups, like the Wisconsin Bakers Association, who wanted the government to shut down healthy competition from home bakers.

“This ruling is a major step for economic liberty and common sense in Wisconsin,” said Erica Smith, lead attorney on the case with the Institute for Justice. “Wisconsin was one of only two states, the other being New Jersey, that banned the sale of goods baked in a home oven. Before a person could sell even one cookie, they needed to acquire an expensive commercial kitchen and a burdensome commercial license. Now, Wisconsin home bakers are free to sell their baked goods out of their home, at community events and at farmers’ markets—something people are already doing in almost every other state every day.”

“This decision opens the door for rural entrepreneurs to take part in the growing farm-to-foodie movement,” said Wisconsin Farmers Union President Darin Von Ruden. “Home baking is a natural fit for many of our family farmer members, who are looking to add an extra revenue stream by selling baked goods at farmers markets, at their on-farm bed and breakfasts, or to family and friends.”

Von Ruden encouraged home bakers to adopt best practices for Cottage Foods, use approved recipes, label ingredients and provide baker contact information on labels or at the point of sale. This week, Wisconsin Farmers Union will launch www.wisconsincottagefood.com, a website that will provide approved recipes and other resources for home baker entrepreneurs.

“The ruling is great news for our tiny town’s farmers’ markets that have been waiting to welcome start-up baking vendors for six years now,” said home baker and plaintiff Kriss Marion. “I personally can’t wait to bake and eat all of that fresh-from-the-kitchen homemade goodness. It’s what the people want, and now they can get it. Bon appétit!”

Prior to the lawsuit, Wisconsin already allowed the sale of homemade foods like raw apple cider, maple syrup and popcorn, as well as canned goods like jams and pickles. But the evidence showed that baked goods were as safe and even safer than many of these other goods. The state even allowed nonprofit organizations to sell any type of homemade foods at events for up to 12 days a year. As the court found in May, it was blatantly irrational to allow these goods to be sold without a license and commercial grade kitchen, but not baked goods for profit. State officials must now immediately stop prosecuting local entrepreneurs and allow customers to decide where they want to get their baked goods.

“This is more than a win for us home-based bakers, it’s recognition that all small businesses have the right to earn an honest living free from irrational government regulation,” said plaintiff Lisa Kivirist. “I’m excited to get in my kitchen and start baking with the rest of our state’s amazing bakers as Wisconsin is finally and truly open for business.”

Wisconsin Farmers Union is a member-driven organization committed to enhancing the quality of life for family farmers, rural communities, and all people through educational opportunities, cooperative endeavors, and civic engagement. Learn more at www.wisconsinfarmersunion.com.