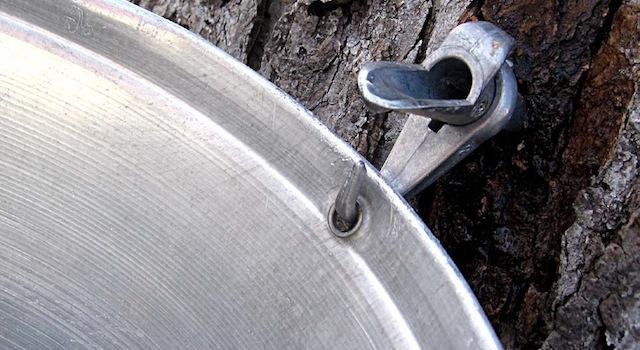 ITHACA, N.Y. — The high price of sweetening your Sunday morning pancakes may be old news. A project led by Cornell University researchers promises to reverse the upward trend and help maple syrup producers get more sap from less land.

The project will decrease the cost of the breakfast staple while protecting an important – and delicious – natural resource: sugar maple trees.

Maple sugar production demands a costly investment of time and energy. Sap is roughly 98 percent water, and producers must boil off most of the liquid to get an optimum sugar concentration to sell. Cornell researchers seek to make the process more efficient by propagating trees with naturally higher sugar sap concentrations – about double the norm.

Breeding trees can be extremely difficult, as plants propagated from seed do not necessarily retain the same traits as the parents, and in the case of sugar maple, it takes 25 years before trees produced by seeds can be tested for sugar content, according to Joseph Orefice, director of Cornell’s Uihlein Forest in Lake Placid, New York. The same problem of “trueness to type” is also seen with fruit trees and grape vines, but is overcome by clonally propagating them from the “mother” plant through grafting. But that process has not proved practical for maples.

“We want to propagate the best of the best through clones, then disseminate the resulting trees to producers around the Northeast,” he said. Efficient cloning would also allow for controlled experiments, such as comparing growth rates and sugar content on different sites, to further improve productivity and resilience.

Keith Perry, director of the Cornell-Uihlein Foundation Seed Potato Farm in Lake Placid, is leading the tissue culture portion of the project. His team has achieved success getting some of the trees into the culture. The next task is to perfect the method of tissue culture, then figure out how to root and transplant them to grow them into full-size trees.

Once successful, the process will also provide a means to prevent the loss of sugar maple tree germplasm in the event of losses due to invasive insects and disease. Climate change could heighten the risk from invasive insects, according to Orefice.

“Though we certainly hope we never have to face such a possibility, currently we’re losing all of the ash species in New York state to an invasive beetle – the emerald ash borer,” he said. “Preparing early mitigates some risks that pests, disease and climate change might pose for sugar maples.”

Ultimately, Orefice and Perry plan to use the genetic resources to improve sugar maple as a whole. Little is known about how site and soil quality affect sugar content, and whether soils can be amended to achieve certain conditions, for example. Considering current advances in genetic mapping, Orefice is hopeful that collaborating with geneticists will help improve sugar maples.

In another study, Orefice is examining the timing of tapping and how it is impacted by climate change, with preliminary results expected later this spring. Both projects are funded by grants from the Northern New York Agricultural Development Program.