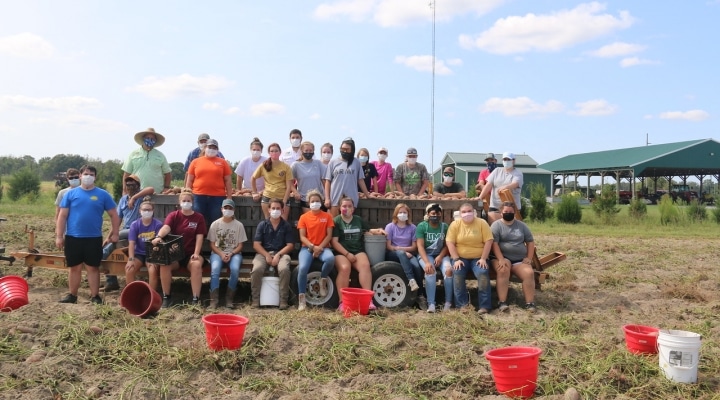 Harvest time has arrived at the University of Mount Olive’s Kornegay Student Farm. Over the next week, approximately 60 UMO students will get plenty of fresh air and a little dirt under their fingernails as they harvest this year’s crop of sweet potatoes. (photos provided)

MOUNT OLIVE, N.C. — Harvest time has arrived at the University of Mount Olive’s Kornegay Student Farm. Over the next week, approximately 60 UMO students will get plenty of fresh air and a little dirt under their fingernails as they harvest this year’s crop of sweet potatoes.

“Most of the students will be new to the process,” said Assistant Professor of Soil Science Dr. Kimberly Tungate. “Some students helped last year, a few come from a background of growing sweet potatoes, but most of the students have never actually harvested this crop.” 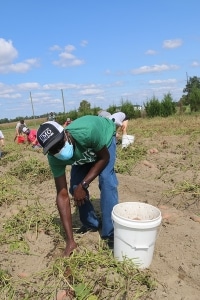 The participating students are enrolled in either a crops class, soils class, or field experience class. Students learn the entire process from growing the slips and planting, all the way to visiting a curing and processing facility.

“Our students not only learn theory and science behind the process, but they also learn from hands on interaction and engagement,” said Assistant Dean of the School of Agriculture and Biological Sciences Dr. Jason Davis. “In particular, this crop is important because NC sweet potato production, which is mostly done in the eastern part of the state, accounts for over 60% of the entire country’s sweet potatoes.” 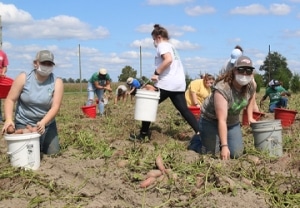 This year’s crop includes one acre of organic and two acres of conventional production. “During our initial planning for the summer, we intended to have more sweet potatoes and other crops, but due to the uncertainty of the pandemic, the plans were scaled back,” Tungate said.

Four varieties of sweet potatoes were planted back in early June. The majority are Covington, a variety commonly grown in NC, which has an orange flesh, and is moderately sweet. “We planted a small test area with Murasaki, a variety which has a purple skin and white flesh,” Tungate said. “We also planted Bonita, which has a white flesh. Lastly, we planted a line called ‘NC15’. It is a new line being developed.”

The University will sell some of each variety this fall on campus and at local market opportunities, while the majority will be sold to a local farmer. “A local farmer is working with us on the transport process, and he will buy almost all of the Covington sweet potatoes to cure and sell,” Tungate said. 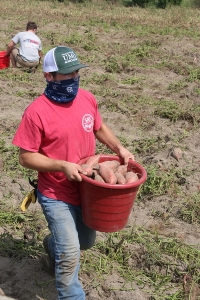 As for the length of this process, Davis said, “As long as the weather is in our favor, we will dig ‘til we are done.”

The University of Mount Olive is a private institution rooted in the liberal arts tradition with defining Christian values. The University, sponsored by the Convention of Original Free Will Baptists. For more information, visit www.umo.edu.