Home » Sweet corn starting off slow, but farmers optimistic for the season 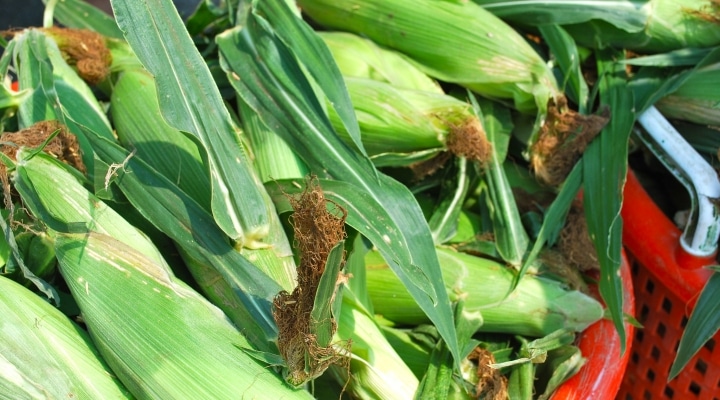 Sweet corn season is a sure sign of summer, but farmers say this spring’s cooler temperatures and lack of rain have delayed the crop’s growth. (photo by Fairfax County, creative commons/flickr.com)

VIRGINIA BEACH, Va. — Sweet corn season is a sure sign of summer, but farmers say this spring’s cooler temperatures and lack of rain have delayed the crop’s growth.

“The nighttime temperatures in May were very cold,” said John Cromwell, a Virginia Beach sweet corn grower and member of the Virginia Beach Farm Bureau’s board of directors. “We had many nights in the mid- and low 50s. For us down here on the coast, that’s really cold.”

Cromwell said he had to start irrigating in May up until Memorial Day weekend because of the dry weather. Despite this, he remains upbeat as he readies for the summer sweet corn season, which runs from now through early September.

“We got everything planted on time,” he said. “It probably should be a couple inches taller, but all in all it’s in good shape. We should start harvesting somewhere around June 25.”

“It was a struggle until it rained the other day,” he said. “I was trying to irrigate, but you can’t put enough water on it when it’s dry like it was.

“It’s probably going to be a little bit later than normal. We usually have corn for the Fourth of July—that’s going to be cutting it pretty close this year. Then again, it could get hot and go the other way too and speed it up. It depends on the temperature—that’s the biggest thing.”

According to the 2017 Census of Agriculture, 4,369 acres of sweet corn were harvested on 416 farms in Virginia in that year. While it’s grown throughout the state, some of the highest-producing areas include Augusta, Caroline, Carroll, Halifax, Hanover and Rockingham counties, Virginia Beach and the Northern Neck region.

Goode, who sells white and bicolor super sweet corn at his farm market and wholesale, said he planted more than last year.

“People are usually hungry for it when it first comes in,” he said. “We’re going to have 15 acres for them this year.”

Cromwell said he’s been busy selling broccoli and peas at Cromwell Produce’s roadside market, and he’s ready to add his Allusion and Glacial white sweet corn to the mix.

Training the next generation of poultry professionals