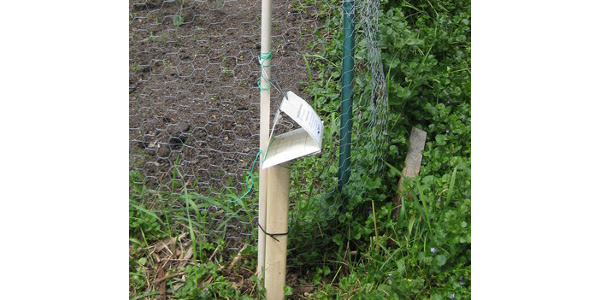 Swede midge trap near garden plot. (Courtesy of the Minnesota Department of Agriculture)

MINNEAPOLIS — The Swede midge (Contarinia nasturtii) is a tiny fly (~2 millimeters long) that infests cruciferous crops such as broccoli, cabbage and canola. Swede midge was first discovered in North America in 2000 and is now known to occur in a number of states and provinces in eastern North America. The MDA has monitored for Swede midge for the past few years with support from USDA APHIS in community gardens and small farms in and near urban areas where the risk of pest introduction is greatest. During 2016, the MDA captured specimens suspected to be Swede midge in both Ramsey and Hennepin Counties and the identifications were recently confirmed by the USDA.

These finds are of concern for growers of susceptible crops but it may be some time before damage from this pest is evident. Swede midge was only found at two sites out of 90+ that were monitored statewide. The MDA will be working with the University of Minnesota and other partners to continue monitoring for this pest during 2017 as well as tailoring current management options for Minnesota growers.

Read more about the Swede midge at the MDA website.