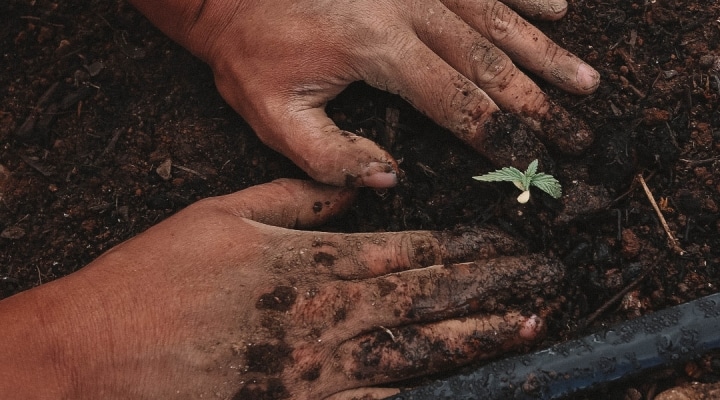 Last month, New York became the second-largest state to legalize recreational marijuana after California, with retail sales expected to begin as early as next year. (Photo by GreenForce Staffing on Unsplash)

ALBANY (AP) — Legal marijuana is coming to New York and hemp farmer Samir Mahadin sees it as a potential lifeline.

Farmers dealing with depressed prices for plants that produce CBD are eager to take part in a statewide marijuana market expected to generate billions of dollars a year once retail sales start.

They already know how to grow and process cannabis plants, since hemp is essentially the same plant with lower levels of THC, marijuana’s active ingredient.

Now they’re waiting on rules that will allow them to switch seeds.

“I would love to get a license to grow cannabis. My wife and I love working with this plant, I believe in its ability and power as a medicine,” said Mahadin, who runs Breathing Web Farms in the Finger Lakes with his wife. “And it could save my farm because what happened with the hemp has been catastrophic.”

Last month, New York became the second-largest state to legalize recreational marijuana after California, with retail sales expected to begin as early as next year.

Existing medical marijuana businesses in New York are expected to play a major role in the new adult market, but lawmakers wrote in provisions to mitigate market dominance. Half of the licenses are supposed to go to “social and economic equity” applicants, which would include financially distressed farms.

Regulators are likely months away from answering market-defining questions such as how many licenses will be made available and how much they will cost. High prices for cultivation licenses, for instance, would freeze out some smaller farmers from the market, said Allan Gandelman, president of the New York Cannabis Growers & Processors Association.

Gandelman, who runs Head & Heal CBD products, is among about 700 hemp farmers in the state. Many of them are motivated to move into marijuana not only because of their familiarity with the flower, but a crash in commodity prices driven by oversupply. Even growers who have succeeded in the retail market for CBD, like Gandelman, see marijuana as integral to their future.

New Frontier Data estimates the legal production of smokable flower in New York will surge to 1.3 million pounds by 2025, all of which would have to be grown within the state.

“If you’re a cannabis grower, you should be able to grow cannabis, period,” said Gail Hepworth, CEO of Hempire State Growers in the Hudson Valley.

Hepworth grows hemp at the large organic farm she runs with her sister in the Hudson Valley and they sell CBD products retail and wholesale through their Hempire business. She said keeping farms like hers from the marijuana market would be like telling a tomato farmer “you can only grow beefsteak, you can’t grow cherry tomatoes. It just doesn’t make sense.”

She’d like to follow the same integrated business model for marijuana that they have for CBD, though the law sets limits on most licensed growers from running retail dispensaries.

One exception would be a “microbusiness” license that would allow “limited” growing and selling. Gandelman compared it to New York’s farm brewery program, but with customers coming to picturesque farms to buy craft buds instead of craft beer.

“Something I could envision for the northeastern states, and New York is no exception, is for example leaf peeping tours in the fall where you tour a cannabis farm and then you go wandering in the Adirondacks,” said John Kagia chief knowledge officer of New Frontier Data.

Mahadin and his wife Kristin Rocco are considering the microbusiness option for the picturesque farm where they also raise chickens and grow organic vegetables. Ideally, they’d like to grow it outdoors or in a greenhouse.

“I want to stay farming,” he said. “And I want to work with the cannabis plant in all facets.”

But the five-member board governing the new Office of Cannabis Management has yet to be appointed. Attorney Karl Sleight, who has experience with the state’s cannabis industry, expected more clarity on regulations by Labor Day.

“It might take a little time and the road will be bumpy,” Gandelman said, “but ultimately, this will be a good thing for farmers around the state of New York.”

Seminar to explore racial and food justice movements in NY