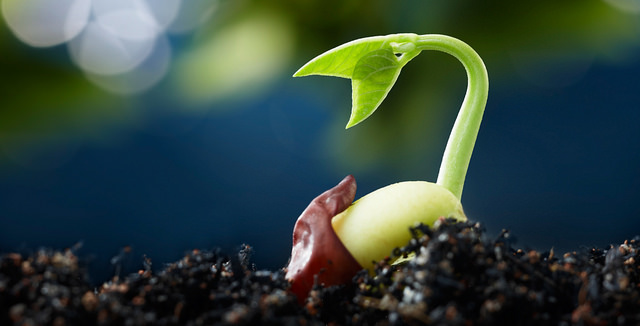 The Svalbard Global Seed Vault contains seeds from agricultural crops world-wide to preserve in case something were to happen to the world's crops, like natural disaster, disease or war. (USDA via Flickr)

GREELEY, Colo. — A concrete triangle juts out of the side of a mountain in Svalbard, Norway. It could almost fade into the mountain when it’s covered in snow in the winter months or even when the arctic desert is bare, save for the eerie bluish glow illuminating the entrance. It’s a doorway to the world seed vault.

It sits about 810 miles from the North Pole and 390 feet into a sandstone mountain. The Svalbard Global Seed Vault contains seeds from agricultural crops world-wide to preserve in case something were to happen to the world’s crops, like natural disaster, disease or war.

William George, of Greeley, was the project manager and civil engineer who helped design the vault, reported The Greeley Tribune (http://bit.ly/2kunFao).

It all started when he helped design a seed vault for the U.S. Department of Agriculture’s Agricultural Research Service in Fort Collins 20 years ago. It sits near Colorado State University’s campus. When he delivered the project eight months ahead of schedule, he was asked to consult on other agricultural projects. He has since been involved in projects in the Middle East, Europe, India, Mexico and more.

He didn’t know anything about seed vaults or agriculture before he worked on the project, but he loved a challenge. He spent time with the scientists at the Natural Laboratory for Genetic Resource Preservation.

He learned the seeds had to be kept cold and dry, so he drew up plans to meet those needs.

When Cary Fowler spearheaded the project for the Svalbard World Seed Vault, he wanted George to join the team. He had some specific guidelines.

“They wanted a facility that was isolated and could last 100 years,” George said.

The first time the team went to survey they site, it was too foggy for them to make it out. They had to go back and wait until the next day. Fog is problematic.

It’s already proved useful. The Syrian civil war prompted the first use of seeds stored in the Svalbard World Seed Vault in 2015.

The seeds need to be kept cold to preserve the genetic material and needed to be safe from potential natural disasters.

Most of the year, Svalbard is covered in permafrost, George said. That helps keep the seeds at the necessary -18 degrees Celsius. The vault is rigged with temperature sensors and a cooling system will kick on if it starts to get too warm.

It’s drilled hundreds of feet into the sandstone mountain, Longyearbyen, to protect it from outside forces.

“It has all kinds of sensors involved in it,” George said. “We had to make it secure because it has the agricultural base collections of the whole world.”

Seeds are stored on moveable shelves. The bags look like the kind that store coffee. The seed’s scientific names and a barcode sit out in front.

No genetically modified seeds are stored in the vault. It’s not because the scientists had an opinion on modification, George said, but rather, they wanted to preserve original specimen.

The Svalbard vault is opened twice per year to add or withdraw seeds. The rest of the time, it’s unmanned. George said they might add animal tissue to the vault someday.

Harvey Blackburn, animal geneticist coordinator, said in addition to seeds, the Fort Collins facility keeps semen, embryos, tissue samples and microbes. They don’t do genetic improvement at the lab, but they do study genetic diversity.

But the vault isn’t always about preparing for doomsday. Storing seeds can help when natural problems happen.

“If Ethiopia had a drought and lost all its ag-based products, they can pull the seeds out, take and plant them and start a new crop,” George said.

The Fort Collins seed vault looks a little different now. Though the building remains nondescript on the outside, sample sizes have expanded by tens of thousands. As George walks through the hallways and sees the fruits of his labor, he can’t help but feel proud of the progress sprouting from his effort.

“Finishing the vault was probably my proudest moment,” George said. “It’s built for humanity and built to last a long time.”

— Kelly Regan, The Greeley Tribune via The Associated Press