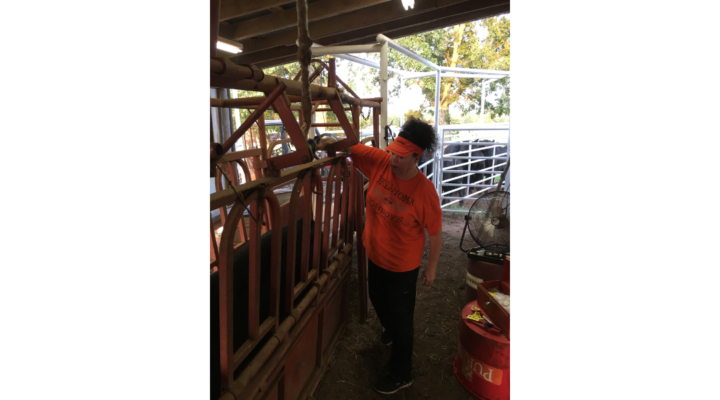 Suzanne is shown here working weaned calves through the chute. Her and her husband, Randy Gilbert, run 120-head of Limousin and crossbred cattle on about 1,200 acres. (Courtesy Photo)

OKLAHOMA CITY — Pull up your bootstraps and get back to work.

From sponsoring numerous youth events through her three businesses to volunteering hundreds of hours each year, she’s a giver, not a taker.

Growing up in the small town of Indianola – which consisted of a school and post office – Suzanne was surrounded by a close-knit community. Her dad died in a trucking accident when she was only 10 years old. Her mom raised her and her two brothers as a single mother with the help of the Indianola community.

“If we struggled having tennis shoes to play basketball, somehow somebody always made sure it happened for us,” Suzanne said. “If we were poor, we didn’t know it. We didn’t live that way. People were just truly, truly good to us. I just try to always pay that forward.”

While she doesn’t consider herself a traditional agriculturalist, Suzanne grew up surrounded by the industry. Before girls were allowed to join the local FFA chapter, known as the Future Farmers of America at the time, she was a 4-H member. Her two brothers were in FFA, and she took full advantage of learning from their livestock projects, consisting mostly of cattle.

“I made every trip they made,” she said. “I did everything they did.”

Her mother grew up in 4-H raising chickens and tending to the garden, so she instilled a love for agriculture in Suzanne. Her dad’s family raised cattle and horses, which is where she learned to ride. It’s this passion that led Suzanne to a life fully devoted to agriculture.

Known by many as the “chronic volunteer,” Suzanne just can’t say no to helping others. And the kicker – her focus is on agricultural youth events.

“My investment in agriculture is the next generation because I know if we don’t invest in the youth, … who’s going to continue that if our generation doesn’t help the generation now?” she asked. “We live in a society where we don’t see as much of that.”

Each time an opportunity arose, Suzanne took advantage of it. At the request of the county 4-H agent, she coached the horse judging and quiz bowl team for 10 years, including coaching them to win the state championship.

“I learned right along with them,” she said.

When her oldest daughter, Dustie, became interested in rodeo, she joined the National High School Finals and the International Finals Youth Rodeo as a volunteer. She has now volunteered for a combined total of 28 years, chairing the IFYR Special Events Committee since 1993. She was on the original committee that brought the IFYR to Shawnee, which has a $5 million economic impact on the city annually.

Both Dustie and her youngest daughter, Annie Jo, also exhibited cattle, pigs and horses, so likewise Suzanne started volunteering at the Pottawatomie County Fair. This year was her 28th year volunteering at the fair, and she is currently superintendent of the FFA area and open horse show.

While she serves on many statewide committees and volunteers at numerous larger events, the Pottawatomie County Fair is at the top of her list because the family event brings people together and shows them “they don’t have to have 100 acres to be involved in agriculture.”

Twelve years ago she saw a need in her community during the holidays, so the Gilberts started the Tecumseh Family Thanksgiving Dinner, which now serves more than 700 people each November.

At Suzanne’s businesses, she heard people were spending Thanksgiving alone or just eating a sandwich, so she did something about it.

“I mean you want warm and fuzzies, come with us on that day,” she said. “They’ll come up and say, ‘Oh, thank you because I’m not by myself.’ It’s so rewarding.”

The event brings in about 30 volunteers and offers a delivery service for people who cannot travel.

On her laundry list of volunteer roles, a few stand out to Suzanne. She served as chair of the Oklahoma State FFA Foundation Board of Directors from 2008-2010 and is the first and only woman to serve in this capacity. She’s been a member of this committee for 17 years. She’s invested her time in Youth and Family Services, United Way of Pottawatomie County, Shawnee and Tecumseh Chamber of Commerce, and many more.

“I’m not settled with the status quo,” she said.

Suzanne was recognized as the 2014 Oklahoma FFA VIP Award recipient, one of Journal Record’s 50 Women Making a Difference in Oklahoma in 2016, and the 2011 Oklahoma 4-H Lifetime Volunteer of the Year. The Gilberts were also awarded as the 2017 Oklahoma Limousin Breeders Association Family of the Year.

Aside from agriculture, education was bound to be a part of Suzanne’s life. In her immediate family, there are 22 teachers. Her grandmother, Mildred Thomas, was a first grade teacher for 30 years at the same school, in the same classroom.

“A love for kids was just instilled in me,” she said.

She graduated from East Central University in 1984 with a bachelor’s degree in elementary education and again in 1986 with a master’s degree in special education.

Why did she choose special education? Not surprisingly, to help others.

Her youngest brother has Tourette syndrome but wasn’t diagnosed until high school, so she became interested in special education after helping him with his condition.

She taught for 13 years at Pleasant Grove Schools, first in Seminole and then in Shawnee. She made sure her students were treated like all other students and “never any different.”

In 2002, Suzanne became the tag agent and manager of Tecumseh Tag Agency. Since 2006, she’s been the co-owner and agent for Gilbert Insurance Agency Inc. of American Farmers & Ranchers. She also owns Crossing Hearts Ranch, a venue for weddings, events and receptions.

“All the volunteering could not be possible without a wonderful husband that volunteers right beside me,” she said.

“I have my own feed truck because we both own our own businesses,” she said. “When it gets dark in the wintertime, I take a pasture and feed, and he feeds a pasture so we can get them all fed. I’m not afraid of work. That’s one thing my mother and grandmother taught me is you can’t get ahead without working hard.”

Suzanne enjoys working cattle, but her real reward comes when they are harvested.

“I help sort,” she said. “I do pick a lot of our bulls, sort the cattle and help haul them off. I joke and tell Randy I’ll help wean, and sort, and tag and all that, but my pay is when we haul them. He has to take me to Cattlemen’s [Steakhouse]. That’s how I get my paycheck.”

While Suzanne stays busy with her businesses and volunteer work, she still makes time to spend with her two daughters, Dustie Butner Baker and Annie Jo Gilbert; her son-in-law, Jordan Baker; and her three grandchildren, Legend, Taycie, and Bryar Baker.

People often tell her she needs to quit volunteering so much, especially when she doesn’t even know the children.

“If you give people a hand-up instead of a hand-out, you’re going to reap those rewards,” Suzanne said. “I know in the future I’m going to look and say, ‘Those people are working and doing what they should be doing because I had one tiny, small part of that.’”

Suzanne likes to be in the background and considers herself a “worker bee.”

“I don’t have to have a title to volunteer,” she said. “I do it because I love it. When I quit loving it, I’ll quit doing it.”

While youth and education are important to Suzanne, agriculture is No. 1.

“We support 4-H and FFA,” she said. “That’s where our heart is. You can’t do it all when you have a small business, so we really do have to be selective.”